The Endless Process of Auditioning 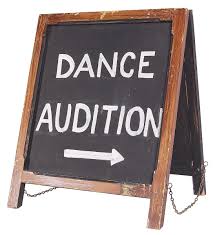 "The DP was really thinking about bringing someone in. We've had some problems in the past with dolly grips and He's a little nervous," the voice on the phone says. Thus begins another audition. As if a first day's jitters weren't enough, now you've got to contend with a DP and Operator scrutinizing your every move (literally). That's one thing about this job that I never get comfortable with, the proving yourself all over again every time you work with a new DP. Usually (well, so far almost exclusively) it works out fine and you end the show with some new friends and some new contacts for future work. I'm a little more mellow than I used to be. If you read most of my earlier posts from, say, 2009, I was much more militant, railing about incompetent dolly grips making it harder on those of us who work hard to learn and perfect our craft. Now, I just shrug my shoulders and say, "Just let me know if there's something I'm doing that you don't like, or would rather do another way. I'm sure after a day or two we'll fall into a groove." What I want to say is, "Check the resume and then call these DP's and Operators. If you still have a question, call someone else." As I've mellowed, (or maybe it's the medication) I've learned to accept this whole process with a little more grace. It just goes with the job, like working in the rain or pulling out a hundred feet of track on a moments notice. I recently had a conversation with a Dolly Grip who happened to be doing a huge budget movie in the same town where I was working on location. He stopped by the catering tent to say hi one day. Now this guy is one of the best. His name is on more than one blockbuster and is very well known in the industry. He was telling me how he was having a hard time with his operator, who he said just didn't like him. "How is this possible?" I asked. He didn't have a ready answer. The operator he mentioned is a friend of mine who I get along great with, but with whom I  had gone through a rather tense "audition" process a few years earlier myself. This is when I realized, it ain't always about your skills. This Dolly Grip is easily one of the most skillful guys to ever step behind a Hybrid, yet the operator had questions about his ability to deliver. They just didn't get along. The stars, for whatever reason, weren't lining up. I think he eventually worked out the issues (and got a raise in the process). What impressed me at the time, though, was the way he handled it. He was the epitome of professionalism and calm. He just told them, "Guys, if I'm not getting it done, send me home and get someone who makes you happy." When I heard this I decided then and there to try and relax a little on my next audition. It's really not a big deal. Sometimes it just doesn't work out and it's not a reflection on your skills. It's quite often a personality thing, or maybe just a series of unlucky breaks. After twenty-four years in this business, I'm finally growing up.

This week, you get a two-for-one of two posts in one day. Hey, I'm on vacation.

PS- Don't forget to ask any questions, or leave some observations in the forum. That place is deadsville. We also have a page on Facebook. Those of you who have been tasked with guest posts are long overdue. Get cracking.
Posted by D at 6:17 PM

On more than one occasion I have started a job with a stand offish and/or openly hostile operator that treats me as if he knows for a fact I have no idea what I am doing. Very frustrating to say the least, but as you said, I assume it will iron itself out after we do a few do a few complicated shots together that work well.
I digress.
After a few days with said operator, I will come in one morning and there is a complete 180 degree attitude shift in his attitude towards me. Respectful , friendly, etc. It is then that I know he went home the night before and pulled my name up on IMDB and found that I do indeed have 20 plus years experience behind a dolly. Thanks for the post D, it reminded me that it doesn't always work out, but that's ok. There are always more jobs down the road.

I did 4 months on a movie with a young DP who was determined to show me he knew more about my job than I did. He would tell me how he wanted the crane track, how to orient the chassis of the dolly, when a move needed to be a tracking crane and when an arm pan would do. I tried getting him to give me the shot he wanted, but he would not relent.
So I just switched off. I would ask him where he wanted the track or the crane, and I would just go ahead and build it. Even if it was completely wrong for the shot.
The beauty was, that once it was setup, his ego wouldnt allow him to ask me to change it.

I know that guy!