I spent today surfing the top deck of an insert car manhandling a Hydrascope as we swerved around the city. Here are some thoughts:

Agree on a speed. Our driver is a professional. He won't go rogue and get us into a hairy situation. If you're going to go faster, the First AD should consult with you. It's your ass hanging out in the breeze.

Harness yourself. A crane arm will drag you right off a car, especially around a corner. It's a lot of mass and you can't fight physics. I know the old argument about wanting to be able to get off the car if it goes out of control. If you have to let go of the arm to save yourself, it's like letting a wild animal loose. It won't stop until it hits something. Strap yourself in.

Watch your height. Especially if you are shooting off the back of the car. You can't see what's coming. The top height on the bucket or camera shouldn't be more than about 12 feet in the city Code is 13'6". Give yourself some leeway. Watch for overhanging branches and low lines. I did all my work on the top deck today from my knees (no jokes) to keep from being decapitated.

Have a spotter. Someone should watch what's coming up behind you. If nothing else it gives you peace of mind.

Let the arm do the work. Don't try to hold it perfectly steady. Let the head take the bounces. That's what it's for. You'll needlessly wear yourself out fighting the arm.

Watch the turns. This is where the mass of the arm can drag you. Your driver should take them slow.

Don't let yourself get talked into anything stupid. A movie ain't worth dying for. 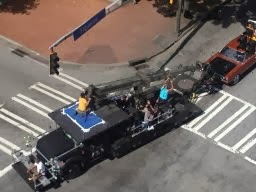 Aaaaand it's a boom town.
I am based out of a city other than LA. Have been for over twenty years, except for a period of six or seven years when I lived in Los Angeles. When I left this town, I had spent well over fifteen years doing an endless string of tv movies, miniseries, and commercials, sprinkled with the occasional big-budget film. I was lucky enough to start out early with a couple of Key Grips who were well established and did higher budget work when it came to town. Then, it dried up. The lure of a favorable exchange rate and a phrase which I became very familiar with-Canadian tax incentives- meant making the choice between getting a job at Home Depot or making the trek out West a reality. I didn't really have a choice, in my mind. I had been a grip since I was nineteen and had few skills that would translate into a career that didn't involve digging or pushing a wheelbarrow at eight bucks an hour. So, with a rarely used Local 80 card, I made the move to California. When I left, I pretty much knew everyone involved in the business in this town. There were the up and comers, like me, and the old-timers, who were the generation before me. Then Atlanta took off. Like a rocket. Sensing where the industry was heading- I wanted to move back home and I didn't want to do tv anymore- I made the trek back, family in tow. Now, I don't know anybody. Everyone is 22 (or seems to be). Where I was once the youngest guy on set, now I'm one of the older ones. So in the spirit of now being one of the older ones, I have a few words of advice, same as they once did for me:

Learn to tie a f^*%ing knot. Learn it. A grip needs to know four basic knots- clove hitch, trucker's hitch, bowline, and square knot. If I have to spend more than a minute (60 seconds) untying a knot, I'm going to cut it. If you want to get fancy, that's fine. I myself went through a sheepshank phase, but don't be an a-hole.

Realize that this could all end next month. Right now, you're riding high. Jobs are plentiful and if one doesn't work out, well, you can just move on to the next one. You weren't here when we were scrambling for every job we could get; the twenty hour- day music videos, the crappy Hallmark movies. You don't want to move the carts? I don't want to hear it. Move the carts. It's your job.  All you will have when this ends-and it will- will be the reputation you make right now. When jobs are once again lean, I will get yours. And I won't lose a minute of sleep over it.

Keep your mouth shut. You're not Super Grip. You can't learn everything about this job in two shows. I've been doing this for twenty-five years and I'm still an idiot. Ask questions.

Don't tell anyone you're the best "anything" in town. You're a half-wit.. We still tell stories about the "best dolly grip in New Orleans." According to a friend of mine, he came in on "C" camera on a show. He lasted one day until he kicked the boxes out from under the track and ramped the dolly down it. Woops. The track is only a hundred dollars a foot. Next.

For god's sakes, learn how to wrap a lamp.

Sometimes, unfortunately, grips have to pick up heavy stuff. Good natured grumbling is fine. Sometimes there is an easier way. But sometimes, you just have to grab some steel and lift. Don't spend ten minutes yakking about it, just do it. Your Grandfather would be ashamed.

The Captain has spoken.

Thanks, you guys for the support for my wife's Cancer Walk. So many of you came through, even people that I don't know. She would give a hug and kiss to all of you if she could. We are overwhelmed. Thank You.
Posted by D at 6:35 PM 1 comment:

After eight weeks off, I'm chomping at the bit to get back to work. So, on Monday I'll go into town and commence my first day of prep on the next epic. I would like to take this moment and salute all the mothers in the world. The patience, love, and .....patience.... never ending patience you display on a daily basis is truly awe inspiring. It says something about child-rearing when I would prefer a fourteen hour day of track laying and dolly pushing to peanut butter and jelly stains on the couch and tantrums in the living room floor. I honestly don't know how she does it. In any case, I will soon be back in the driver's seat for a twelve to fourteen week extravaganza of green screens, Technocranes, dance floors, and all that goes with it. Thank God.

I had the good fortune to teach a Dolly class for our union local a couple of weeks ago and it was a rousing success. It really was a pleasure to be able to drone on for a couple of hours before fifteen or so listeners who were truly eager to learn. And they did great! We went through each of the dollies and highlighted their various pros and cons, had a track laying seminar, ably given by my frequent B camera dolly grip, and did a little dance floor simulation. This was a basic class, just to give the rudimentary pointers, but I hope to hold an intermediate class soon. My thanks to those of you who showed up and showed an interest. I would also like to thank the guys at PC and E for their invaluable assistance. They did a great job!

I think it's important to reiterate something here that I've said before. If you want to be a dolly grip, you've got to be a good set grip first. It's the foundation that everything else is built on. Yes, that means flagging and lighting and even twelve by's. It all starts there. And as a bonus, you can always go back to it if you have to. It's a skill that will serve you in so many ways. I still use stuff every day that I learned as a set grip over twenty years ago. Learn it.
Posted by D at 8:30 PM 2 comments:

As most of you know, I've been trying to navigate Paypal to set up the whole T-Shirt payment thingie. I had a "shipping and handling" charge attached to it, which didn't seem to be kicking in. So, I raised the price of the shirts to offset the 12- to- 15 dollar shipping and packaging etc. Now, it seems to be working and adding it automatically, making the t-shirt price somewhere north of 35.00, which is a little ridiculous. So, I've refunded some money back to those who've paid this ridiculous price and will now again reduce the price of the shirts to 15.00 plus 15.00  shipping and handling (believe me, it costs that much). Good luck to us all.
Posted by D at 4:14 PM No comments: