A Moment From The Set...

DP: "You're starting too late."

Operator: "We started when he entered frame. You want to be moving already?"

DP: "Yeah, you should be moving before he comes in."

Or as they should have called it, Shit (2011), is a simply horrible movie. Every lazy filmmaking mistake you can make was made in this piece of crap. Sigourney Weaver lookalike? Lazy filmmaking. CGI creatures that were done BETTER thirty years earlier by Rob Botin with stop motion animation? Lazy filmmaking. Bland Swedish (Nordic? Norwegian?) character development ? Lazy filmmaking.The last twenty minutes when the characters are suddenly on the planet from Aliens? Lazy filmmaking. American hero (?) with a raspy voice? Lazy filmmaking. As a huge fan of John Carpenter's The Thing, I really was looking for something special out of this movie. What I got was bad CGI, worse acting, and even worse filmmaking. Blah blah blah and I'm done with it. So if you have nothing to live for or have absolutely no taste in movies, rent Shit (2011), or as it is marketed, The Thing (2011).
The Captain has spoken.
Posted by D at 10:38 PM 5 comments:

We are doing a lot of blind* Technocrane moves on this show with a very exacting director (and DP). As a result, I've recently become reacquainted with one of my old rules that I had almost forgotten: generally, it's better to be a little early, and fudge it in the feather-down, than late, because you can never catch up. This is a principle that usually comes in handy when you are trying to match to a certain passage of dialogue or land on a specific word in a piece of dialogue. As long as you don't get too far ahead, you can always stretch out the move in the feather to make it almost unnoticeable. If you're behind, there is almost no way to catch up and you end up just stopping short when the dialogue ends, running the risk of ending on too loose a frame. Usually, this is a function of actors getting faster in their dialogue as they get more comfortable with a piece of dialogue. Especially off camera dialogue. This happened earlier this week when the writer/producer (whom I've known for years)was reading off camera to an actor supposedly watching him on an iPad. Another actor was cued to walk in on a specific word in the off-camera dialogue and I had to be in a certain spot to see him walk in in the background. He read faster and faster until the camera was flying around to reach the specific point in the dialogue. At this point, the only way to not be late was to get there early, and slow it down into a creep to the number two spot before wrapping around the actor who walked in. It worked (although we still took around ten takes to get it right. So remember this: better to be ahead and slow down, trhan behind and rush to catch up.

* A blind move is one in which you can't see all the actors or set pieces because of your position on the bucket. Also called "flying blind." It often involves a little on the fly calculating combined with desperation and luck.
Posted by D at 5:37 PM 4 comments: 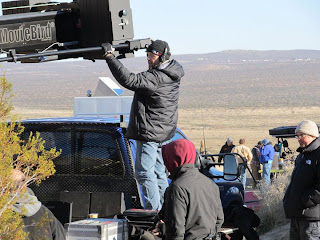 Finally, Something To Do

I've been a little lax in the posting duties lately. Mostly it's because we have not only gone into straight nights, but also have entered a dialogue phase of shooting where the camera isn't mounted on a car, so I actually get a chance to swing a Technocrane around, or push a dolly. As a result, I'm a lot more tired than I normally would be, so forgive the rarity of posts.
Don't forget the Fisher Open House on May 18th from 9AM to 4 PM. have a beer tell Frank Kay hi for me.
Well, it's pissing rain (a continuation of the rain I stood in all night). I've got cheeseburgers from Five Guys, a jug of Captain Morgan, and the beginnings of a six day work week starting at 11AM in the morning. Life is good.
Posted by D at 6:35 PM 2 comments: