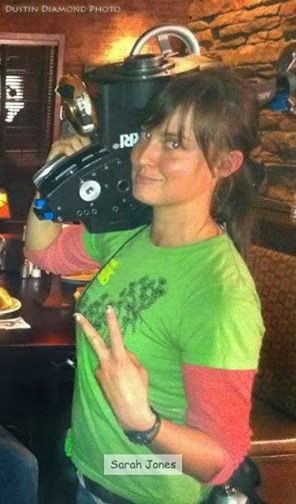 PS: For those of you who knew and loved her, please leave any good memories you have here in the comments. I didn't take the time when she was here, but I can do it now.
Posted by D at 8:46 PM 87 comments:

Dolly Grips spend an inordinate amount of time correcting mistakes. Most of these mistakes involve foreground actors blocking the other actors in their scenes by missing marks, or leaning. Now, I love actors, in general, don't get me wrong. But it seems that no one is teaching these younger ones the mechanics of clearing yourself for camera. I even heard one argue with the DP that he wasn't going to stand where he was supposed to. "Then you won't be in the shot," said the cameraman who is forever one of my heroes. Now most of the time, it's just an innocent mistake. I know it's difficult to emote or remember your lines while also hitting a mark. It's also difficult to swing around a fifty-foot steel arm that keeps changing lengths inside a freaking building full of classic cars and not hit one, miss all the actors, and still hit your marks. It's like, what you get paid for. Rule one for aspiring actors: If you can't see the camera, it can't see you. Don't worry, if you don't grasp this rule, I'll fix it for you. Or, you could take the time to develop camera awareness and be a brilliant technician as well as actor. There are a few who are veterans at this. Almost all of the old-schoolers from the studios were taught this early on. The younger ones are mostly taught how to be "angsty" (or angry, sometimes I don't know). I'm going to drop some names now of actors who make my job so much easier and excel at it.

Keanu Reeves- Yes, that one. This guy is the most brilliant, believe it or not, at clearing himself for camera and taking stage direction. Between takes, he's not in his trailer with some young extra, he's off to the side practicing handling his props. If a foreground actor blocks him, no sweat. He just leans out without taking his eyes off the other actor.

Denzel Washington- Horror stories aside, when I worked with him he was a gem. He took the time to communicate to me and the operator what he was going to do and always gave a clue when it would happen. Love the guy.

Tom Hanks- An actor's actor. Knows what's happening and why and where the camera is.

Stephen Moyer- The guy just gets it. He is not just an actor in front of the camera, he's a collaborator and knows how it's done. He doesn't flop into chairs or bound out of them like he's been shocked. He actually gives you a chance.

What brought this on was a guest actress on a series I'm presently doing. Blonde, beautiful, and seemingly sweet, she proceeded to chew up the set like she was the only one in the scene. Always to one side of her mark (remarkably, always the side that blocked number one on the call sheet), she was so uncannily adept at blocking the other actors (she once blocked two of them at once) that the camera department and I soon came to the conclusion that she had to be doing it on purpose. She once walked out of a shot towards camera and managed to tilt her head at just the right moment and at such an unnatural angle that it obliterated everyone but her. At one point, after gamely trying to clear the other actors, the operator took his eye off the eyepiece and looked at me. I raised my hands, locked the brake and took a step back. I told him I was done. I can't take the dolly practically out of the room to clear her. The director gave up and we went into tighter coverage with her offscreen next to camera.

Anyway, I don't want my actor friends to get upset at me. I do respect you. Just please learn to be aware of the camera. I know it can be done and while I can't do what you do, please help me help you.


PS- Michael Taylor over at Blood, Sweat, and Tedium has a great guest post up. Check it out!
Posted by D at 12:06 PM 3 comments: