The late Conrad Hall delivers a Master Class on How It's Done. My friends, if you've never seen it, rent it. I saw it on the big screen, but you can get a taste. A gorgeously photographed movie the way they used to do it. They don't make them like this anymore. Shout out to Dolly Grip Mike Schwake. Gorgeous work my friend. This is the movie we all wished we'd worked on.
Posted by D at 9:31 PM 7 comments: 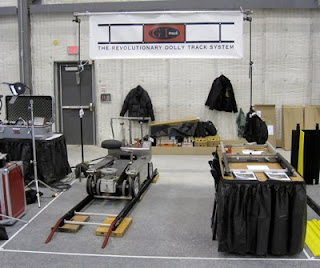 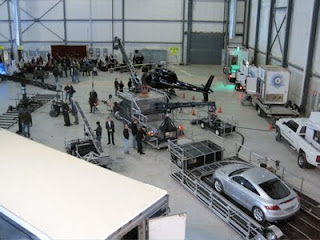 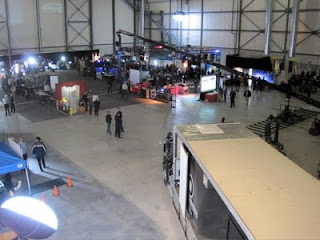 I spent the morning at Chapman- LA checking out dollies for my next show. Shafi, the tech who sets up my dollies, offered to take me around to see what's going on in the various shops there. I had been through it before a few years ago, but it's been a while and this was the first time I had been there on a Saturday, giving Shafi an opportunity to take me around at a more leisurely pace. The most interesting thing was the new 75' Hydrascope, which Sam, the man building it, was happy to show me. It's still in pieces (big pieces), but it's going to be a beautiful arm. It will mount on a Titan base as well as have a smaller motorized base for other applications. I am really excited to see the finished product.
I also saw one more future dolly, which I can't talk about yet (Ok, I didn't see the finished product, just a hollowed out chassis with a label on it). It's something that's been talked about for a while and I know a lot of you will be interested in, but I don't know when it will be finished or when I can expand on it. So enough about that.
I met a lot of the guys behind the scenes at Chapman, and got a lot better insight into what goes into building a dolly, from material delivery to final testing. As an East Coast Dolly Grip for many years, I never really had an opportunity to deal with their West Coast facilities or people. My dollies all came out of a local rental house or from the Chapman facility in Orlando, so, other than talking to Christine or Hector, I never really crossed paths  with them. The dolly is the tool of our trade, though, and we depend on these people to make sure our machines do what we need them to do. So, I'm making an effort to be a little more involved with the people there. If those of you who use Chapman have never been through the shop, or met any of their talented technicians, I suggest you drop by on a Saturday and learn what goes into making these fantastic machines that we all depend upon. Give them some feedback. If they don't know what we need, they can't help us. As Dolly Grips we have to have a relationship with them. They've always gone above and beyond the call of duty to make sure my dollies were right and I rest easier knowing that they're only a phone call away.
Posted by D at 1:40 PM 4 comments:

If you're in the Toronto area and not working, come on down to Pinewood Studios' Mega Stage for the Cinequip White's Feb Freeze. Tuesday Feb 9th, Open 11am til 8pm.

I'll be there all day manning the GI Track booth with Gil. Come by and say hello and talk dolly turkey!
Posted by Azurgrip at 10:51 AM 1 comment:

They Don't Know What We Do.

I wrote a post a couple of years ago about the fact that a lot of directors, and even a few DP's really have no idea exactly what it is that we do. I was going to repost it, but couldn't seem to find it, so I'll just add to it.
Our job is pretty deceptive. It looks pretty straightforward to someone who's just watching. We lay a track, put the thing on it, and go from one to two over and over.  A trained monkey could do it. Even a few Dolly Grips I've worked with over the years weren't sure exactly what  we do (or they were just really bad at it). They stand around and munch on doughnuts at crafty until someone calls them over and the operator tells them where to put the chassis and how to lay the track. Having not seen a rehearsal, they proceed to blow through about four takes until they finally hit one. I love those guys. As long as they're around, I'll always have a job. And we've all worked with the directors. You know the one who walks up after you've just completed a five point floor combo with three booms and a roundy into the end, and slaps the operator on the back, says, "great job but can you go a little faster?" and never even looks at you. He doesn't know what we do. Or the operator is setting up a shot with the finder and the director, looking on, asks, "can you do that?' You immediately speak up and say yes or "I can't get the camera quite that close to the wall." The director looks at you like, " Who is this guy?" and the operator looks at you and says, "How about here?"
We're there to solve the practical problems of setup, as well as deliver the movement, yet are often completely left out of the conversations concerning it.
I told this story once before but it bears repeating. I did a smallish feature a few years ago with a DP who had hundreds of music videos under his belt, but little or no feature work. Aside from being a dumbass, he also labored under the belief that he knew everyone's job better than they did. As a friend of the director, he had been given the DP slot on a studio feature. He proceeded to ignore every suggestion from the operator and myself, thus adding hours to each day. One day, after I had insisted on throwing down a piece of plywood to hold overs (I was tired of waiting for the young actors to magically hit their marks). We got it in a couple of takes and the DP walked up to the operator and said, "that was great. You held all those over the shoulders!" The operator said, "I didn't do anything, D did it!" The DP looked at me and said, "D did that?" This fracking DP on a 10 million dollar movie didn't even know what a Dolly Grip did. The operator said, "Yeah, he's the Dolly Grip." It's the same mentality that forces us to use a dolly that we are not as familiar with or simply don't particularly like as opposed to the one we've used every day for years just because the DP, inexplicably, likes a particular one. This makes no sense to me at all. If I do my job well, you won't notice or care which dolly you're on, and you might find that you like the one I use better. I've managed to turn several camera operators and at least one DP  on to my favorite. Generally, my job goes a lot smoother if they give me all the info, and then get out of the way. I often tell my present operator (an English chap) "Go get a cup of tea!" which is his cue to leave me to my business. I like to set it all up, and have them come back ten minutes later to a waiting camera, ready to go.
I will soon be leaving my show to go do a feature in Atlanta. Although I don't like doing this, the HBO rate just makes it more likely that a better offer will often result in people leaving. The Key Grip understands and was aware when I took the job that this would happen. Still, I'm leaving a great crew whom I love working with. I hope to come back afterwards to finish the season. So, for the next couple of months I'll be back at my home on the East Coast. My great B -Camera Dolly Grip will bump up and we've managed to get an old friend to come in on B. I hope it goes well. (But not too well ; ).
Posted by D at 1:45 PM 4 comments: