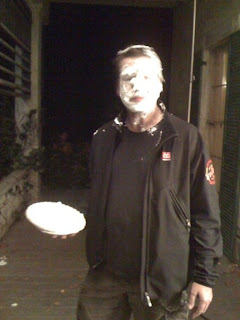 There But For The Grace of God....

"We'll go around this curve and maybe the car won't flip over."
-The stunt coordinator on a movie I did at age 21, speaking of the Shotmaker on which I was riding.


Before you read this, read this: http://hollywoodjuicer.blogspot.com/2010/05/rainy-night-in-georgia.html and this: http://thehillsareburning.blogspot.com/2010/05/film-set-tragedy-lessons-learned.html.
OK, now that you're back, I want to relate my experience with this incident. I recieved a call from one of my readers (who I'll call Andy) right after this happened. Andy was very upset because this production had contacted him previously about working this shoot and he had declined the job. More importantly, he had warned the production coordinator that they needed to have an experienced rigger as well as gaffer before attempting any of the things they wanted to do. When Andy called me, he was furious, upset, and confused about what was a completely avoidable situation that they were WARNED about. Georgia being my backyard, I made some calls to find out the details. I didn't learn much, only that the "local" gaffer was no one I knew, and the crew was made up of students. This immediately told me three things: these guys had no business doing the things they were doing, this promising young man died as a direct result of this fact, and this could have easily been me twenty years ago.
The film business is a nebulous world at best. Staffed by freelancers, crews tend to move around a lot. They get work mostly by reputation, and there aren't any real competency standards. As far as production knows, the guy tightening the bolts on the truss hanging over Tom Hank's head has a serious coke problem and was just released from prison this morning. It's up to the people doing the immediate hiring- the Key Grips, and Gaffers, to ensure that their crews are competent and safe. As a fresh faced twenty year old, I was just excited to be a part of this world and I didn't really think too much about the danger level of the things I was often asked to do, or the sanity of the person asking me to do them. You want me to hold this 2x4 and whack you with it if you get bit while tying-in? Okay. I'm just honored to be the one you trust your life with. You want me to go rig this condor? Okay. Now which one is the crescent wrench? I would gladly do things I wasn't even remotely qualified to do, often at great danger to myself or others. As I got older and more experienced I learned when to say no, and more importantly, that I could say no. It's up to us to largely police ourselves, and as far as professional studio productions go we do a pretty good job. As a general rule, someone who is unsafe or incompetent is gone before lunch. The unions and studios  have stepped up their attempts to lower the probability of accidents (and lawsuits) by instituting the safety passport program. This only applies to West Coast locals, though, and the "tests" at the end of the classes are arguably geared toward the  most moronic among us. The union/ studio world also tends to be a little "smaller." Most of us know who the players are and the bad apples get bad reputations pretty quick. It's the world of student films and low budget productions where more things are apt to slip through the cracks. The bottom line is this, and I think Michael Taylor said it best: it takes years to learn and master gripping and juicing. If you haven't put a lot of time in with a lot of experienced mentors, you've got no business rigging a condor or running the kind of power it takes to juice up a film set with 18k's. You wouldn't hire a college freshman to plumb or wire your house, why would you trust him or her with thousands of volts or steel over your head? This was a stupid, needless tragedy that happened because production didn't want or have the money to hire someone who knew what they were doing. They treated it as an afterthought. A hobby. And now they're trying to hide. Atlanta is full of top notch grips and juicers. I'd put a lot of them up against anyone in the business. A quick call to the union local or the film office could probably have resulted in someone willing to come out for a couple hundred to  help out some students. I actually lived very close to Monticello a few years ago. If I had been there when these guys were shooting, and had nothing else going on, I would have gladly gone and helped them out just for a free meal. I've got no problem helping students. And the first thing I would have noticed is the power lines. It's the most basic thing you learn when dealing with crane arms or condors. Scout the area and know what the hazards are.
As you can see, at least two better writers than I have covered this unfortunate happening. I was just struck by how young this boy was and saw in him a little of that skinny, naive, but determined young man I once was. Then I was reminded of Andy's phone call and how upset he was that his advice to these students had been ignored. So if you're a young grip or juicer or just a student trying to break in, keep your eyes open.  Ultimately you are responsible for yourself.
Posted by D at 5:52 PM 11 comments:

I'll be out at the Cinegear Expo tomorrow at Paramount (at least if I can make it after working all night). Hope to see some of you there. You can register online at cinegearexpo.com. It's 20 bucks at the door but it should be worth it.
D
Posted by D at 3:39 PM 1 comment: