I am a Dolly Grip

I am a Dolly Grip. This means that I am an expert in camera movement. I have a highly developed sense of spatial relationships. I can stand an actor up and sit them down consistently. I can repeat a move down to the millisecond. I understand blocking. I know where a camera has to be to make the shot work even without staring into a monitor. If a camera operator asks me,"Can you boom up and push in at the same time?" my answer is, "Can you pan and tilt at the same time?"  I can swing a Technocrane arm around inches over an actor's head, land on a mark and repeat it precisely. That's what I do. If you can't do these things consistently, you are not a dolly grip. If your signature move is to park the dolly, grab an apple box, sit down and open a paper or Facebook, but you can't stand up an actor, you are not a dolly grip. You are a pretender. And you make my job harder .Pushing dolly is a craft. It takes years,YEARS of work. You don't learn it overnight. You don't learn it by being the only guy available so you get the job. You learn it just like you learn anything else: repetition and time. It's not about a bigger paycheck. It's about the craft. Learn your craft. Learn your craft. LEARN YOUR CRAFT. I am tired of going onto jobs with operators I have never worked with before and having to audition because they are used to working with crappy Dolly Grips. I should start each job with at least the assumption that I am a competent Dolly Grip. But because we have allowed mediocrity to be the rule, I have to prove myself over and over again to new operators and DPs. Get off the apple box, pay attention, learn blocking and eyelines and basic filmmaking or do something else. It ain't hard, we are not doing brain surgery here. It just takes dedication and work. Every job I go on, I hear stories about how bad the previous Dolly Grip was. You should be every bit as good at your job as the camera operator is at his (or hers). I started this website to uplift the craft. To teach those who are just starting out, and to share tips among us veterans. But I'm tired of hearing horror stories from camera  operators about how bad their last Dolly Grip was. Here are some basic skills: Stand up or sit down an actor consistently; Know and understand eyelines; Repeat a move consistently; Do a compound move with the tilt wheel not being turned; Repeat a Technocrane move consistently and know how to find and remember an eyeline; Understand blocking and know the general shot before the op or DP tells you where it is; Know when dance floor or track is called for; For god's sake be able to execute a basic compound move. Guys, we have to do better, or we will always be the second class citizens they already think we are.  Anyway, rant over. Drink up and stay safe.
D
Posted by D at 7:02 PM 15 comments: 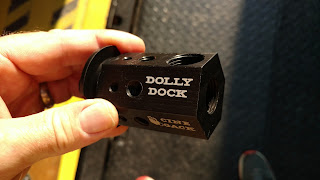