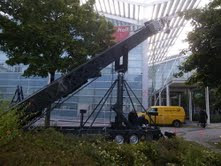 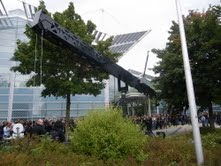 This one from Onno. You can get a better idea of the height of the post with this one. Also, a representative from Technocrane left a comment when he couldn't find the email address. It is dollygrippery at gmail dot com. Thanks for any pictures or info you may send us. We appreciate it.
Posted by D at 9:24 AM 1 comment: 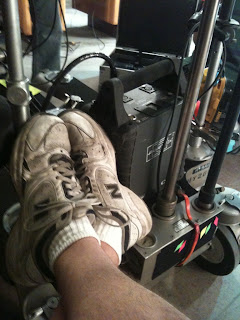 Pure and simple - we're on our feet all day. We aren't lucky enough to be able to come to set and plunk our set chair in a nice in the way spot and set up our magazines. We are running up and down stairs and gravel driveways - trying to find grip to start the 200ft running in parallel or Flintstoning a stop in an office hallway. I always feel it trying to do crane lock offs while trying not to move my feet from their planted spots.

I'm starting a new show this week and am trying to get into the tradition of purchasing new shoes with the start of each new show.

Generally I go through 3 - 5 pairs of runners a year. I'm a stickler. I've got wideish feet, so I've had to stay with a brand that I can get a 4E width. I've been wearing New Balance's 600 series for years. They're reasonable in price depending on where you shop. While I was waiting for the salesperson to return, I started looking around at other options (the buy one, 50% off the second pair was also tickling my wallet). I like the Merrell's, but once again, I get into an issue with finding my size and width - I've stopped wearing Nikes and Reeboks because of lack of widths - forcing me to buy larger sizes than I need (think Clown Shoes…).

Just in the last year, I've also come over to the Blunnie side. I finally plunked down the cash for a pair of Blundstones last year and have slowly been working my feet into them. I find depending on the store, the folks that sell Blundstone are a different breed of salespeople. Mind you, for the price I'd hope so, but it makes the purchase of the boot a lot easier on the pocket book, but they really want to see you happy wearing Blunnies and will do most anything to help - cleaning, stretching, footboards, etc.

All this opens another door to posture - the right shoe can go a long way to help with back trouble. Wrong shoe and you'll be in pain everyday.

People You Should Visit...

I'm a little short on time and inspiration this week, so I'm going to try and send some business to some friends. These are all companies owned and operated by Grips throughout the world. They've put themselves and their talent on the line to build successful businesses. Check 'em out.

The Gripworks. Sanjay Sami has built one of the largest Grip shops in Asia. If you need it, he can make it. And he's a helluva nice guy. Visit him at thegripworks.com,

Grip411. If you need it, these guys know where to get it. Rick Davis has the info on anything grips use from clamps to cranes. Need answers? Visit grip411.com.

The Gentlemen Grips. I have been affiliated with these guys for almost my entire career, first as a hammer, then as a Dolly Grip. They're my family. Key Grip Alan Rawlins is one of the best in the business and can equip any size production. Check them out at gentlemengrips.com.

Solid Grip Systems. Onno Perdjic is a genius. Check out his Truss Dolly System and you'll know why. Visit them at solidgripsystems.eu

GI Track. Developed by Dolly grips for Dolly Grips, this innovative track system is generating a lot of interest. It's well thought out and extremely well-built. Check out Gil Forrester's company at gitrack.com.
Posted by D at 8:37 PM 6 comments:

I arrive at the backlot at a large metropolitan studio at 6:30 am, tired because I worked a 60 hour week, slightly edgy because I know absolutely no one on the crew, and pissed because it's a Sunday. I take the waiting van from the parking structure to catering and quickly wolf down a bowl of oatmeal and a non-descript muffin. The air is slightly chilly this early and I shiver as I find the still-closed grip truck. I am a fill-in B-camera Dolly Grip.

My friend Jerry had called me last Thursday and asked if I could fill in for him  on Sunday for a splinter unit he was pushing B- Camera on. As I am already in the middle of a rather difficult tv show, the last thing I wanted to do was take a B-Camera job, especially on a Sunday. Now, you have to know that Jerry is no ordinary B-Camera Dolly Grip. In real life, Jerry is a Key Grip who does very big movies with temperamental directors, DP's whose names sound vaguely European, and lavish catering. I have turned Jerry down for the last two jobs he's called me for because of previous bookings and my IMDB page is much the poorer for it. He is also a great guy and a truly phenomenal Key Grip. So, I told him if he couldn't find anyone else to do it, I would. I congratulated myself on my ability to be caring and selfless, as well as clever. Then, secure in the knowledge that in a town lousy with Dolly Grips, someone would take the call, I promptly forgot about it and went on about my business. Then Friday came and I noticed the text message recieved light blinking on my fantastically stupid Blackberry. "Couldn't find anyone to do it. Can you?" My heart dropped. But, I resigned myself to it. I couldn't turn this one down. If you turn down too many the calls stop coming.

First impressions: I knew absolutely no one on  this crew. Ok, I did know the A- Camera Dolly Grip in passing and by reputation and we had mutual friends. Oh, I remember the Key Grip. Same deal, though I had worked with him before.  A nice guy. The rest? Never seen 'em before in my life. I shake hands with the guys, mumble a "Nice to meet you" and unload my Peewee from the truck. Next came a whirlwind of track laying, over-holding, helping the A -Dolly Grip build a deck for a dance floor, and then, at the 8 hour mark, a company move. It went by in a long, harshly sunlit blur. It's always a little discomforting to work with a completely unfamiliar crew. They all know each other. They all know where the extra wedges and the turnbuckles are. They all have nicknames or call each other by their last names. I on the other hand feel a little lost and not a little addled. Between the long week, little rest, cumulative burnout from endless work, and just being tired of movie sets in general, I'm more than ready for this day to end, and not a little relieved when the last half of the day consisted of mostly A- Camera only shots. I had a 6:30 am call on Monday and wanted to get home in time to get at least 8 hours of sleep. At hour 16 I began to realize that tomorrow was going to suck even more than my most fevered dreams could even approach. Finally, they decided to cut the last scene and after thanking all the guys, exchanging phone numbers with the A- Camera Dolly Grip (I had lost his in a phone that I washed in a washing machine a while back) I wearily headed toward the parking structure.
The next day, running on three hours sleep I-  yelled at the camera operator (twice), barely restrained myself from yelling at the DP and getting fired, drank too much coffee, and went through a whole tin of snuff. Was it worth it? Well, in the process I also- helped out a guy who needed it, hopefully earned myself  a little more time in the boss' s phone list, met some cool people who are really good at what they do. Oh yeah, I made a little money in the deal too. One thing I've learned is that as bad as it sucks now, that check next Thursday tends to make it all a little more worthwhile. Thanks, guys for the opportunity. It was a pleasure meeting and working with you all. Now, I've got to go apologize to my camera operator.
Posted by D at 8:24 PM 3 comments: 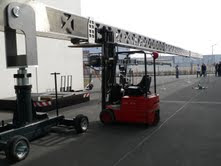 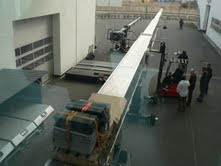 Our friend Ian sent us pictures of the new 100' Technocrane being tested in Germany. Thanks to the guys at Supertechno for permission to post them.
Posted by D at 9:59 PM 12 comments: