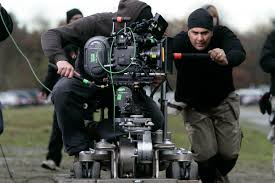 Besides the Wes Anderson films, what are some of your other favorite collaborations?
I loved working with Peter Weir & Russel Boyd. Two geniuses who work with so much respect to their fellow crew members. I like working with nice people - Robert Yeoman, Bruno Delbonnel, Darius Khondji, Steven Knight, Rodrigo Prieto,  just off the top of my head.
As I get older, I realise that I value a pleasant and respectful environment on set more than anything else.
Life’s too short
Posted by D at 11:32 AM

Excellent post! I've been following Sanjay's cinematic adventures on Facebook for some time now, and it's nice to hear the back-story -- plus, it's aways enlightening to hear the insights of a consummate professional.

Sanjay, D, a great read and a great convo. Like everybody else, I agree with that closing sentiment. D, do some more of these while we have the down time. In the meantime, everybody stay healthy.

Thanks everyone. Ive got a couple lined up now and more on the way hopefully.

Excellent write up. Thank you for sharing your knowledge.

Excellent Blog! I would like to thank for the efforts you have made in writing this post. I am hoping the same best work from you in the future as well. I wanted to thank you for this websites! Thanks for sharing. Great websites! Local Packers And Movers Bangalore

Movers and Packers in Bhandup said...

I had the chance to work with Samy 10 Years ago on a Bollywood movie in Berlin, i'm so happy that it happenend ! I've been working as a key Grip for 10 Years now, and I still remember some of the advices he gave me back in the Days, Great and respectful Person, i'd love to work with him again one day !

Infycle Technologies offers couples for care and technology in addition to Python Training in Chennai, 100% of the internship class will be prepared. After completing the training, the participants will be sent to the upper MNCs interviews. Call 750633333 to get more information and get a free display. Get Python Training in Chennai | Infycle Technologies