I ran into a situation on the last show that retaught me a rule I've always tried to work by: Do what you know is right. We were in a room with carpet and the floor underneath was clearly less than perfect. It was a dance floor shot and I called for the pieces I needed for a standard single layer surface. In the back of my head my spider sense was tingling that I was making a mistake but I brushed it aside and laid the floor. I was in a hurry and wanted to get it done and get the camera up so I'd be ready once we were lit. On the first run through all the marks with just me and the operator, it was clear that I had made a mistake. There were bumps on the joints and the floor was a little wavy so the camera was wobbling from side-to-side and it was completely unusable. The DP and the guys were in the middle of lighting so I had plenty of time still. I told the operator I needed to redo some things. I then went to the key grip and told him I needed to relay the floor. Now my key grip on this job was a veteran dolly grip of forty years. Most of you would recognize his name. He had taken the job as key because the DP, a very talented young up and comer, is the son of a camera man he had pushed for for years. So I went to him and said I needed to lay a double floor (two layers of plywood instead of one, and the tops, screwed together to form a solid base to roll on). He said, "I wanted to suggest it but didn't want to get in your rice bowl."  That's the way he is. He's respectful and trusts his dolly grip to know best. I told him that I had known better but took a shortcut and made a mistake. So, in the middle of lighting, I pulled it all out and relayed a double floor. And it worked perfectly.  Somewhere in the 12 years of posts on this site is the instruction, "Double lay floors on carpet." I still remember typing it many years ago. Everything is shot specific, and an experienced dolly grip knows what he or she can get away with. But I knew better and still took the quick and easy way out against my better judgement. I broke my own rule, And it bit me in the ass (well, almost).
So here is the gist of this post. Go the extra mile. If your experience is telling you to do a little extra to save yourself grief down the line, listen to it. It's the most important tool in your bag. There are a lot of times that I'll have a shot on a wood floor and the key grip will ask if I just want the tops with no plywood. I almost always say no. I would rather do a little extra work and know it's right rather than do the minimum and then fight a bump or wave in the floor and have to fix it with actors and director waiting around. Do yourself a favor. Go the extra mile. Believe me, there are few things worse than rolling toward a bump that you know is there because you half assed it and wondering if it's going to blow the take. Your work will be much stronger if you can concentrate on the move rather than wondering if that little bump halfway through the move is going to show.
Anyway, there's a thunderstorm rolling in, I've got a nice glass of wine, and another week off coming up. Life is good.
Stay safe out there,
D
Posted by D at 5:57 PM 82 comments:

Another post that has nothing to do with pushing dolly or film making. Bear with me. 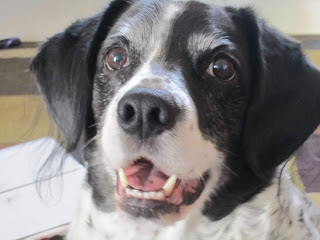 My wife, Rebecca, found him tied to a tree in Compton, of all places. Emaciated and clearly miserable and mistreated, he shivered in the rain at the end of a very short rope. Animal control was called and he was taken away. My wife, being my wife, called for four days to keep track of his condition. She called me at work asking if we should take him in. I said no (we already had two dogs in our little LA house and I always said no anyway). She said, "I'm taking him." I said, "Ok." I came home to the most pathetic creature I had ever seen. He was all skin and bones and by that I mean he had no fur and every bone was visible. He didn't look like a dog by any definition you would use. She had set him up in the garage after consulting a vet who said he had the worst case of mange he had ever seen and would probably die within the week. He slept for a week straight.  But under her loving care  he didn't die. His fur grew back and he slowly gained weight. We named him Oliver after another famous orphan, and soon he was member of the family. He was certainly the most neurotic dog I had ever seen. Easily scared after a short lifetime of abuse, he slowly came to trust us, although he was always a little unsure of all this good fortune. His lineage was uncertain. Rebecca said probably Beagle and bird dog and something that crawled out of the woodpile. He liked to bark at the crows, something my wife called, "Going on sky patrol." His bark was a booming, sharp roar that you wouldn't have believed could come from a dog of his medium size. It drove me crazy. He barked to demand his dinner, or attention, or to go out or just for the hell of it as far as I could tell. When we walked him he strutted with a gait that reminded me of that bulldog from the old Warner Brothers cartoons. I always imagined a cigar in his mouth and a bowler pushed forward on his head. He liked beer and many's the time I would get up to get something and come back to find his tongue stuck deep in my bottle. Scotch, ditto. He not only came back from his inauspicious beginnings, he flourished, if a little uneasy that we might turn on him at any time.
We had to put our Ollie down this morning. Sixteen years of sky patrols, beer drinking, and stress had taken it's toll. While his mind was clear, his eyes had grown cloudy with age and his back end, as happens with so many dogs, had finally given up. A cancer mass had formed on his mouth. Rebecca made the decision last night that it was time. That's the deal we make when we join the pack. So today after a treat of McDonalds egg and cheese biscuits, among many hugs and kisses, he went to sleep on his own bed. He was a good boy.
So long Oliver. I'm having a beer in your honor. I'm proud to have been in your Pack. We love you.

I Need Some Input

Hi all. I've been asked by my local to teach an advanced dolly class. I guess it's for experienced working dolly grips to sharpen their skills and maybe learn some new ones (me included). I'm just having a little trouble figuring out how to structure it and what to teach. Any ideas? If you guys were taking such a class, what would you want to cover? Help me out here.
D
Posted by D at 7:57 PM 10 comments: