We've all got our own way of doing things. From laying track to how we like our boom control set up, Dolly Grips are a pretty diverse bunch. I enjoy watching other guys work when I dayplay or fill in on B camera on a show. I like seeing how other Dolly Grips set up their gear and their actual technique. As far as personal quirks go, I have a few: I dislike seat offsets. I think they are dangerous and over used. I rarely use pie pieces in dance floors. I've managed to make it through the last few years without ever using one until this show. I'm not even sure why I dislike them, I just do. (In the interest of honesty, I did break a 10 year streak and also use a seat offset for one shot on this show. My camera operator is a great guy and a fantastic operator; he's also 7 feet tall and there was no way out of it). I always use white one-inch gaffer's tape for my marks. I make the number one mark about four inches long and the number two mark about 10 inches long. If I have a bunch of marks and need to differentiate one of them, say the end mark, to keep from getting confused, I'll tear a piece of the tape in half so it's 1/2" wideand use it for that mark. I can tell by glancing at it that it's special without having to mark a number on it with a Sharpie. These are just a few of my things. What are some of yours?
I know I'm slow in posting these days. Again I apologize and hope to be back up to normal when this job ends.

PS I owe a quick apology to AJ. For some reason, I keep wanting to refer to her beautifully written blog as "The Hills Are On Fire" instead of it's real name The Hills Are Burning. I don't know why this is, but I have corrected it.
Posted by D at 1:06 PM 12 comments:

Last week, Key Grip Alan Rawlins, (and my boss of many years) of the Gentlemen Grips, had a little motorcycle accident while dirt bike riding with his grandkids. He crushed a vertebrae and is in a brace for a while but he's OK. Everybody moves up a slot. We wish him a speedy recovery. I've recieved several phone calls asking about him and just wanted to post this quick update.
D
Posted by D at 2:43 PM 1 comment:

I'm not doing a good job of explaining the roundy shot from my previous post so I'll try it again.
Two rooms opposing on opposite sides at the end of a hallway. Opening frame is on an actor walking toward camera from the other side of the room we're looking into. Camera is just inside the room with the dolly itself in the hallway. As the actor approaches, dolly pulls back about four feet (that's really all you have) and as he passes camera, and crosses the hall, the dolly roundy's around, basically executing a pan with the actor as he passes. He stops in the doorway of the room across from the one he started in. Camera ends up 180 degrees from where it started over the actor's shoulder.
There, I hope that clears up the confusion. If it doesn't, let me know and I'll try it again.
Posted by D at 4:48 PM 4 comments: 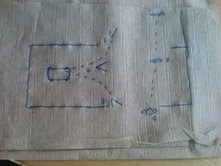