This question was posed to me recently: What am I watching?

I'll admit. I'm one who uses a monitor. I feel in this day and age of high page count and long work hours that anything that can help me go out quicker and less takes - I'm all for it. One can't always get close to the camera when there's two (or more) camera crammed against each other and assistants all over so, one feel a bit removed. The monitor really helps and I feel that I'm more "synergistic" with the operator.

Having the right tool for the job is more than ever important these days. One can't always get by with a little 3" Casio wireless anymore. It's a big decision whether to spend big bucks on something that you may not even get the kit rental on. I purchased last year a Marshall 7" HD monitor. Not top of the line, as I'm not pulling focus from it, but something that has reasonable brightness to see in the outdoors (with the help of a hood). 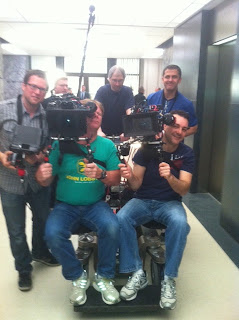 Coming back to the "real" world?

Where have a been all this time? I've just finished working on a feature film.

Well, thanks to Non-Disclosure Agreements that I've had to sign I can't really say… and as the NDA is still in play I still can't say anything till the movie is released next summer.

However, I can say that I've been working on the largest project to be shot in Canada. I was working as the "B" Camera dolly grip. Up to four cameras every day. I worked with different operators, depending on the situation. Most of the time on headset with the director. Days with 300 extras. Days of SteadiCam. Days of two telescopic cranes fighting for the same spot. As big as the scope of the movie was, the rigs weren't big. Its seemed we were either on Steadi or crane and the moves weren't complicated. Always 1 to 2. The director was very prepared and knew exactly what he wanted, but at the same time, camera work was figured out on the day. We generally shot the first rehearsal and worked from there.

For me, I was an odd duck on the crew as it wasn't my regular crew, plus the out of town Key Grip was working with a new crew for him. They left me alone to do my job, as I worked with camera operators and the director.

It was a long seven months. Not many long days. Good turn around. Rarely did we go late on a Friday night (the Friday Five Dollar Draw stories is a post unto itself!). It was a paid vacation.

Now, after a couple weeks off, I'll be returning to the meat grinder of television series work. Mondays to Saturdays.

Every year I wish I could make it down to L.A. for the J.L. Fisher open house and CineGear Expo (and the Chapman BBQ?). Please let us know if you're going and what you saw that interests you!
Posted by Azurgrip at 4:04 PM 3 comments: