This is What Dolly Grips in India Look Like. 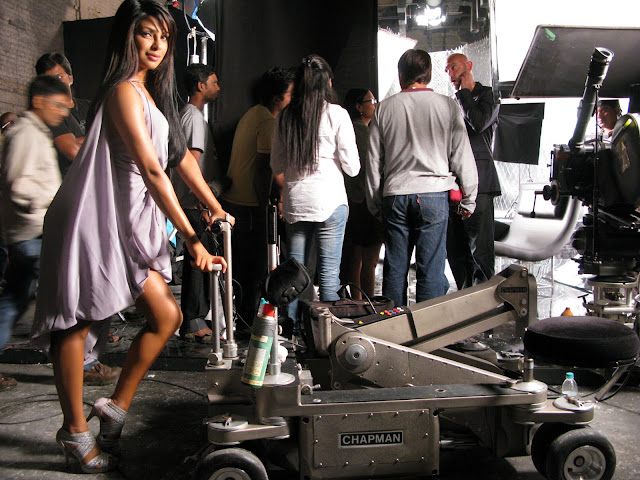 Sanjay sent me this picture of Priyanka, his Dolly Grip in India. This is hands- down one of the coolest things I've ever seen. If she starts working in America, we're all out of a job*

*OK, just kidding. This is Priyanka Chopra, one of the most famous actresses in India (or probably the Eastern Hemisphere) and a former Miss World, posing with Sanjay's new Hybrid.  She's beautiful ain't she? (I mean the girl, not the dolly). Thanks to Priyanka and Sanjay.
Posted by D at 9:42 AM 10 comments:

There's not much going on right now, other than work and sleep. My hometown of Atlanta is slammed with  feature work, while Los Angeles is sputtering along on TV. I'm working on a couple of post ideas, I just need time to write them. Hopefully this weekend I'll get a chance (unless I get a long turnaround). Stay safe.
D
Posted by D at 9:45 PM 2 comments:

Every so often, I get a little fired up about our field. I (we) work a lot of thankless hours to deliver shots that really make or break a picture. We do it for much less pay than we're worth, and everyone but the producers generally know it. Since 2007, every year or so, I do a "state of the field" post. Usually it's after a few rum and cokes and often, I wake up the next morning in a mad scramble to correct whatever I wrote the night before. This year , I didn't really offend anyone, unless you're the kind of half-ass Key Grip who promotes your half wit brother or son to Dolly Grip because he needs a job. If you are, thanks for keeping us down. You are a big part of the reason our rates are what they are and why I have to demonstrate that I can do a compound move on each show.


*This doesn't preclude the contributions of sister Dolly Grips. Unfortunately, our sisters haven't made inroads into pushing dolly like I hoped they would. I know of several kickass female grips who I would put up against anyone. Alexa is the only sister Dolly Grip I know personally. I would love to hear from more of you, so write in and tell me your story.
Posted by D at 2:14 AM 12 comments:


This is one of the newest things that Chapman is developing. It's an offroad dunebuggy set up for hard mounting or Steadicam. Clearly for MOS shooting.  Ask them about it next time you're there.

PS- I had another post up this morning but I'm not satisfied with it, so I'm rewriting. It'll be back up soon.
Posted by D at 9:35 PM No comments:

Another site I frequent had a question from a grip who is in the market for a crane as to which is the best. Immediately, I saw the makings of a post. A great many of the replies recommended the GFMs and Giraffe. First let's look at a few different kinds of cranes. The portable crane really changed the way a lot of movies are shot. The Louma revolutionized the industry with the ability to place a camera in a tight space and still deliver a crane move. Everyone's old favorite, the Lenny Arm continued this trend and before you know it, we were inundated with portable cranes, most from Europe or South Africa, and most named after animals. The Giraffe, Panther, Pegasus, Phoenix, and others greatly expanded the Dolly Grip's options and since they could be purchased, unlike the Lenny Arm, a lot of Grip's wallets. My earliest crane experiences were with the beloved Titan and the often cursed, but very effective Lenny. Then came the Giraffe, which due to it's ease of assembly and relatively light-weight components, became the most often seen, used, and purchased crane (at least in the markets I was working in). It snapped together quickly, could accomodate a rider at shorter lengths, and a "hothead" at longer (I believe up to 37'  if memory serves) configurations. It also didn't involve the large wrenches and cumbersome steel of the Lenny. Then, the Giraffe seemed to become less visible, and the Phoenix became the new favorite. Now, with Technocranes everywhere, the Phoenix seems to be the most used portable crane when the shot doesn't call for an extendable arm. I like the Phoenix. Gentlemen Grips, who I work for often, has two, and they are easy to put together, more solid than the Giraffe, and have a minimum of "whip" even at the longest length. The Lenny arm will still get it done, with a little more work (how many of us have put it together and realized we'd forgotten to put the "ears" for the cables between the sections?). One thing's for sure, it's a solid choice because it's an ultra-reinforced chunk of steel. I think you could hit it with a stakebed and it would probably destroy the stakebed. For jibs, I prefer the Fisher 23. This is the best non rideable portable crane in  existence in my opinion. For ease and speed of assembly and great action on the bearings it can't be beat. I like the Hydrascope and really want to see the new 70 footer. I also like the Moviebird just for it's great arm swing and really easy action at almost 50'. These of course are my own opinions and experiences and not at all the rule. There are a lot of portables I haven't tried, such as the GFMs and Panthers. Give me some feedback. What are your favorites?


I wrote this on my wife's fancy tiny computer,which I can barely see. It's almost like writing a post on my cellphone, aside from the fact that I'm in Vegas and likes my Vodka drink. Therefore, it's not the most well written post I've ever done but I hope you get the gist.
D
Posted by D at 7:04 PM 9 comments:

Happy Birthday America and thank you to those who have served and still serve our country!
I'm off to Vegas for three days. Have a great week!
Posted by D at 10:31 PM 1 comment: