Sometimes the decision of which camera platform to use is easy. You're given a situation, you weigh the options and the answer is self explanatory. Sometimes it's made for you. The DP says, "Just throw down a stick of track and do it on the dolly." Sometimes, you have to mentally flip a coin (a weighted coin depending on the conditions) and go for it. You can't spend too much time debating it. My dad, who was a bricklayer in his younger years used to have a saying: "Quit figuring and lay block." This means you can pull your ruler out and calculate everything down to the inch for every scenario or you can give it your best guess based on experience and go to work. Anytime I find myself overthinking a shot I'll whisper to myself, "Quit figuring and lay block." Then I just go to work. And it's never not worked out.
We had a similar situation last week. We had a shot which had several points to hit with about six actors standing on one side of a long table. The DP suggested the Technocrane off the bat. The operator and I both balked at the suggestion because often when you get into more detailed work, a fifty foot camera crane isn't always the best tool to use. We both wanted to put the Oculus on the dolly and go. We debated for a few minutes and mentally flipped a coin. A weighted coin. It was weighted toward the crane because the Oculus needed to be underslung to get out over the table at one point. On the other hand, I knew the way these directors and DP worked, we would end up going somewhere height wise that hadn't been planned on. (Also, we were covered because the crane had been the DP's suggestion). So, we quit figuring and laid block and it worked out to be a great shot.
I hope everyone has had a good, safe week. We had a moment of silence for Sarah that same day. Be safe out there and don't be afraid to say No if something seems off.

Time for a refill.
D

Quickie update - went to White’s February Freeze and saw the new Panther S-Type dolly. Sebastian from Camadeus was great on showing the capabilities. Unfortunately I didn't get a full hands on. 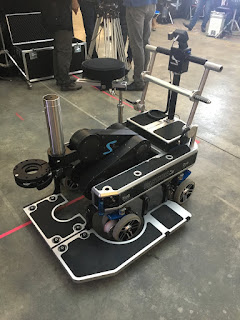 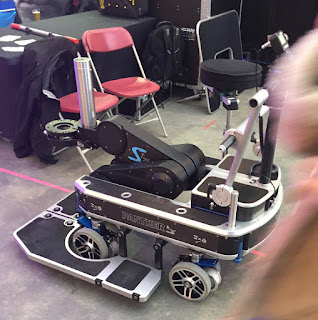 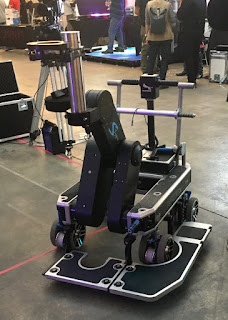 And caught up with Jesse and Frank from Chapman. 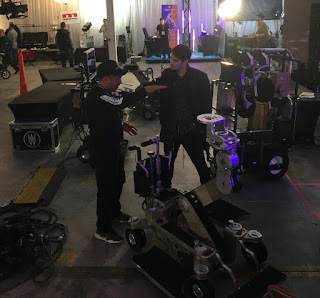 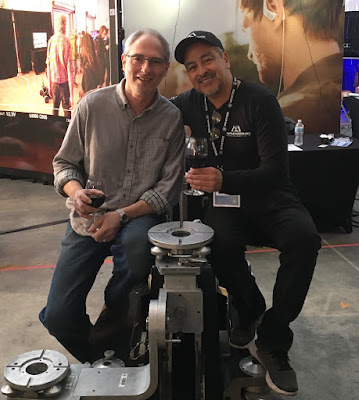 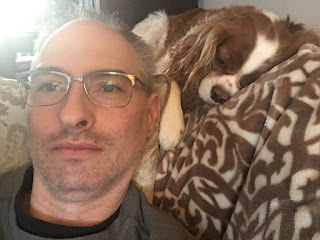 Requested post: What Do You Use For Dance Floor?

I put in a call for suggestions for posts on our Facebook page (I just got in from work and am two drinks in and too tired right now to do a whole link thing. Look up dollygrippery on FB) One of the requests was for what materials are used for dance floor by different Dolly Grips. First, I'll go into a little history. When I started, we used birch plywood and luan (yes, luan as a top layer). We would lay it out and screw it to the plywood with one inch screws. As you can imagine, it cracked and popped and didn't work well at all but it was what we had. Later on, someone discovered plastic polymer sheets as a topper over the birch (birch is the ubiquitous plywood used in dance floor. It's all I remember as a young set grip). These sheets were the game changer. They were flexible and quiet, and durable. Now there are two types of plastic toppers used: ABS and Sintra.  We use 1/4". Which one you use is really up to you. I've used both, and really don't see(or care) about the advantages of one over the other. It's a plastic sheet. ABS is more rigid and sometimes has a pebbled surface on one side. Sintra is more flexible which makes it easier to get into small spaces. I tend to use Sintra more mainly because that  is what my best boy orders and I don't really care as long as it's square and the edges are smooth. I tend to not be too picky about which material I use. They both have their strengths.
The bottom layer is a little trickier. For years, as I mentioned before, birch was the go-to choice for plywood. It's straight and smooth and relatively light. Everyone used it for years. Then it all fell apart (literally) I noticed it around 2006 when I did a movie in New England. After about two weeks, the birch we had started bowing. Then it started falling apart. It was later explained to me that most birch found in the US was low quality Chinese made birch. So we began the search for a better plywood. What we found was Baltic Birch.  Plywood from The Motherland. Heavy as hell but it kept it's shape and worked well. Later on and for the last few years, I've used Red Oak. On the show I'm on now, though, we were assured that the birch was American and not likely to fall apart like my last experience. So far that seems to be the case three weeks in. Anyway, there's my short answer to the question. Thanks for asking!

For those of my friends not in the business, a "dance floor" is merely a slang term for a plywood surface laid on an existing floor to give a smooth camera move in more than one direction, unlike track.
Posted by D at 10:17 PM 10 comments: