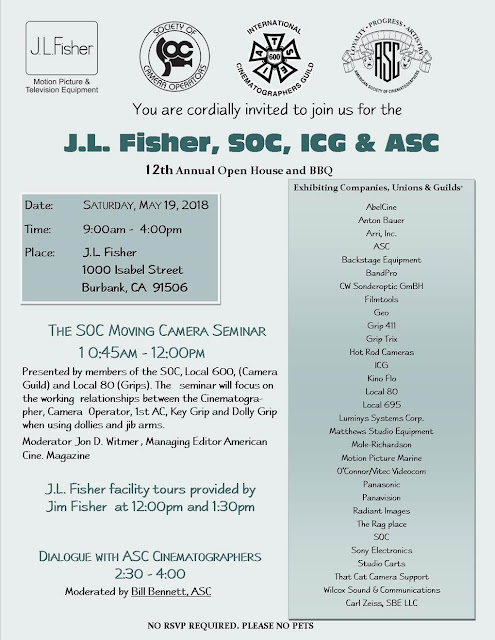 It's that time of year again.  This is a great event year in and out. Unfortunately I won't be able to make it this year as I'm working on the other coast, but if you are able, go. You won't regret it.

Here's a tricky subject. Key Grips traditionally bring their own Dolly Grips. It makes sense since Dolly Grips are actually members of the Grip Department. Over the last few years however, I've noticed an uptick in the number of calls I get from camera operators checking availability. I haven't spoken to any of my colleagues about this but I would imagine they've noticed the same thing. Years ago, this never happened. In the last year alone though, I've done "B" camera on a show with my regular Key Grip because the operator brought his own guy from LA, and I've lost a show that the operator campaigned hard for me to get, but the Key Grip insisted on bringing his own guy. I should say at this point that I have no resentment whatsoever in either of these instances. I've been in both positions before. Although I would have liked to have done both of the jobs as "A" camera, in each case I understand why I ended up where I was and respect both decisions. The point I'm getting at is that in each case the camera operator had a Dolly Grip in mind and contacted him for the job. I think a couple of things are in play here: The huge demand for content has resulted in more production probably than at any time in history, leading to a shortage of Dolly Grips who are qualified to do the job; and more young Key Grips who don't understand the position and hire Dolly Grips who can't put the camera where the operator needs it. I hear over and over again nightmare stories from camera operators about their previous Dolly Grips. Guys who can't do compound moves. Guys who can't do dance floor moves. I heard a couple years ago about a Dolly Grip, "A" camera on a fairly large feature, who couldn't put the low-mode on. It was inevitable that operators would take matters into their own hands and build up a list of Dolly Grips that they know will get the job done and not make them look bad. I think this is a good thing. It goes a long way toward establishing us in producers' and directors' minds as not just an afterthought but as one third of the shot. Which we are.

Time to mix another one.

I've gotten a few emails concerning Black Panther. This movie used a variety of camera movement platforms, mostly Technocrane provided by the professionals at Cinemoves. Scotty Howell has built a world class company and we literally use no one else, When I say a variety of platforms, I mean the shoot was always changing from handheld to Technocrane to dolly to Steadicam to Spydercam to Movee to whatever else they could come up with. Camera operator Scott Sakamoto and I were constantly switching modes and the result is one of the most satisfying movies I've ever been privileged to be a part of.
Chapman, as usual, came through with a Hustler 4 that practically did the moves itself. It was a wonderful machine (and no, I won't say what number it was). The scene in the council room was all dolly and the machines performed flawlessly (I wish I could say the same about the Dolly Grip) on what was the longest day of the show. The Warrior Falls sequence was a ten day marathon. I was particularly happy with the shot following T'Challa out of the ship down the stairs into the water which was accomplished with a Movee and a Mimic. The shot pulling him out as he prepared for battle was me manning the Oculus head, trying to stay ahead of Chadwick. Two Technocranes, a Steadicam, three handheld cameras and a drone made for some tough days, but the sequence speaks for itself. The casino sequence was accomplished through visual effects stitching, Spydercam, and a detachable Movee rig designed by Cinemoves. A lot of work went into this sequence by Grip, Camera, and the first class stunt team. In all, a very fun, exhausting and satisfying experience,

Black Panther: Tools used- Chapman Hustler 4 dolly, Super Peewee 3 dolly, Cinemoves Technocrane, Moviebird, Oculus Head, and Movee. Spydercam. Special thanks to Kenny Rivenbark, head tech extraordinaire, Mike Howell on the pickle, Sean and Henry of Cinemoves for the Movee rig and my B camera dolly grip Kenny Bolton. You guys were like a machine. I was just along for the ride.
Good luck to our DP Rachel Morrison and congrats on your Oscar nomination,
Congrats also to my buddy Scott Sakamoto for your Lifetime Achievement Award,
Coog, I love you, dude.