“At what height would you like the camera today?" 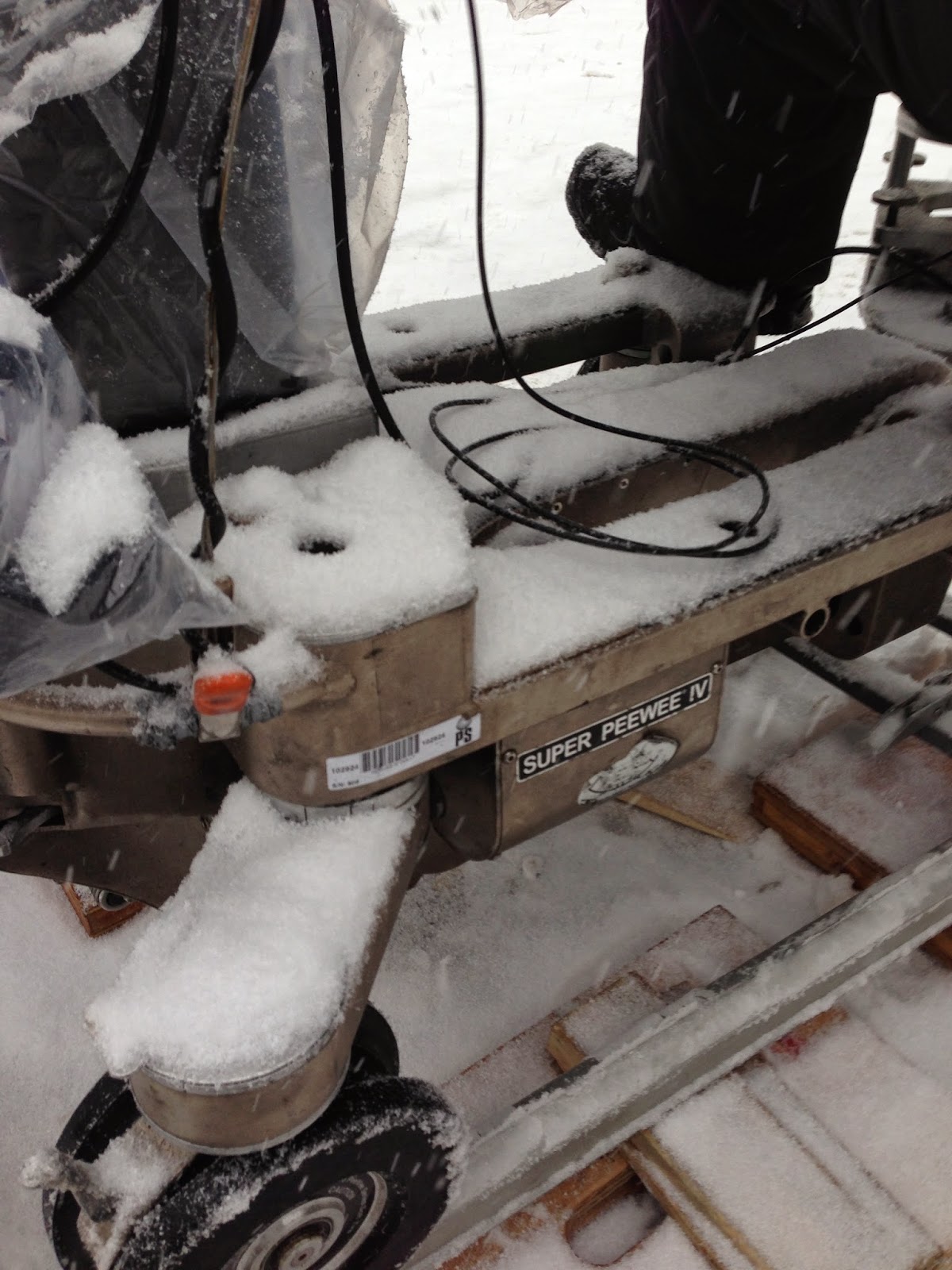 Here in Toronto, we were lucky enough to miss the Blizzard of ’15 that dumped a few feet of snow on the North American east coast, but I’m not lucky enough to be able to hibernate, so I find myself having to work through the winter, and most likely outside in not the nicest of weather.

Dressing appropriately is important to combat the cold, but what I’m having to deal with is the dolly freezing. We’re using Chapman Pee Wees - a 4 and a 3+ (A & B cameras respectively) and the oil pan heating pad in the 4 really doesn’t cut the mustard, never mind none in the 3+.

One of our local rental houses is smart enough to try by adding a pipe heating coil through the back end of the dolly, but generally it does very little. In my current situation, the dollies are stored in uninsulated, unheated, unpowered trucks so in the morning the dollies come out as solid bricks of ice. A couple of 2K open face lamps pointing at the dolly’s underbelly is the morning ritual, but there’s got to be a better way.

(and don’t get me started on salt / ice melter and it’s effects on dolly tires!) 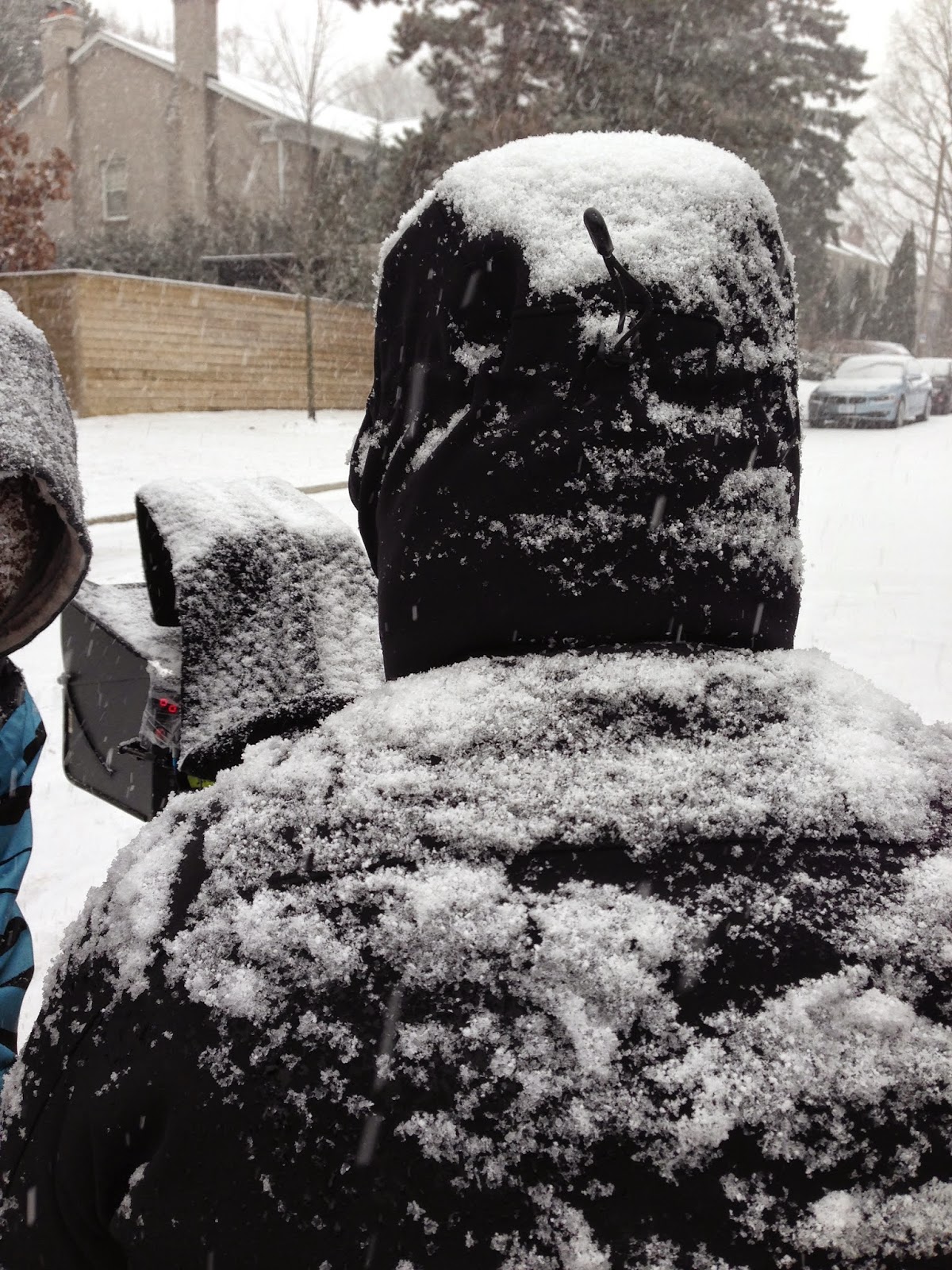 Would you believe there was no snow when we arrived an hour earlier...

I have battled this problem since day one. Since the trucks move at night etc, I cant leave the dolly plugged in to use the heater. I guess something battery powered is the answer. By the way, before people ask why I'm in Toronto, this post is by my coblogger Azurgrip (another of my favorite dolly grips but it's bad form to blow your own horn on your own blog).
D

I thought long and drunkenly about it and rewrote it twice and then left it alone.

Interesting that this should be the latest entry in the blog as one of the Dolly Grips I work with on NASHVILLE brought up this concern just last week. Not Toronto cold here, but it is the middle of Winter and loosing time in the morning to "warm" the dollies could be done without. We thought Marine batteries with inverters to plug into might be the answer. However, after a call to a Chapman tech that thought was inconclusive and we are still waiting on an answer. Seems there is a fear that prolonged plugging in might not be the best for the heating element. Sounds odd to me, but if we get answer before you guys do I'll pass it along. Keep up the good words boys!

On dollies - you can swap out the oil for a lighter grade. This is common practice for a lot of our clients, esp. in Scandinavia. If it works with Fishers, it ought to work with Chapmans. Another thing that may help is cycling the dolly throgh 10-15 lifts, as the friction of the oil moving through the dolly will cause it to heat up by itslef quite a bit (relative to say -10°C). If you're already trying both of these, then I'm at sa bit of a loss as well.

Just a thought from across the pond. Though we don't have such extremes we regularly use baby cot electric
blankets adapted to run off truck batteries. Just does enough to keep the chill off. The camera boys sit their lens boxes on them as well to prevent fogging.

More thoughts from the field. Temperature here continued to drop as we shot over multiple nights during this week. Other things I've noticed with my Pee Wee IV: the rental house will also have to think about the grease in the XOX head, as with three different types of metal in there, all expanding and contracting at different rates, I sheared off an internal pin.

That was the last straw and finally swap chassis out, as the pump motor wasn't working properly at those temperatures. The rental house couldn't figure it out, so they conducted their own test and left the chassis out in an unheated truck overnight. I'm still waiting for the fully report, but their early findings were that it took over an hour to get the dolly working at a minimum.

I just got back from purchasing some magnetic heater blocks. The instructions say that at 120v / 300 watts, the block's surface can range from 149 deg C to 204 C (300-400F). Hopefully a couple well placed blocks will help. If not I have something to warm my tea.

Yes you can get a lighter grade fluid for Chapman. Although it doesnt get as cold for as long here, it is a problem.

I can vouch for Wicks suggestion.
I had some extreme conditions while shooting The Grand Budapest in the winter in eastern Germany / Poland. I had days when the arm would struggle to make the journey up, and not boom down at all.
I switched out to a thinner oil, I can't remember the grade right now. I checked with Frank Requena and he said it was fine as long as it was synthetic.
Also stuck the adhesive foot warmers (the ones you stick to your insole) onto the oil pan every morning. It may or may not have helped, but those things get pretty hot. We also tried all the other methods suggested here. The thinner oil really helps.

Zippo makes hand warmers that run off lighter fluid. their metal case makes it easy to apply some adhesive magnet tape that sticks pretty well to clean surfaces. They run twice as long and get twice as hot as the disposable kind. That and a wipe down with non-toxic anti-freeze makes a night in the truck ok in Alaska.

The only cauton about external heaters or heat sources I'd add is that there are plenty of heat-senstivie parts inside dollies, from lubricants in bearings to hoses, belts, plastic parts and electrical cables. If your manufacturer can't give you a good guideline, maybe your local rental house dolly tech can try out a few things with you to develop a long term procedure for cold weather. It's tough for Chapman and Fisher to replicate winter in Burbank :)

Hi!
What we have done with our Fishers is to (as Wick mentioned) change the oil to Q8 auto 15 ATF
We use this as an all year oil now since it works fine during summer also.
Nikolaj
Head of Grip dept
Ljud & Bildmedia AB Stockholm, Sweden

Might be a bit late with this but you could try 'heat trace cable'.