Ironing Out The Bumps 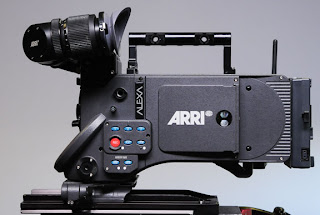 I often get asked about the importance of a level track vs a "lay of the land" one. My reply is usually that I'm more concerned with a track that has no bumps, than a level one. I had pretty much satisfied myself with my track laying and had rarely had a problem. Then along came the Alexa. This is my first feature that isn't film. Every show I'd done up to this one had been shot either on a Panaflex or an Arri 435, on back to the old BL (remember the coaxial mags?).  These old film cameras were as stable as anything you could ask for. Since the obsolescence of steel track, I rarely even had to use skate wheels anymore except for extremely long lenses (150mm or above). The first day on this show, I noticed something was different. I had a quick dolly move with an actor who stood up and walked briskly across a baseball field. We were on a geared head, on a relatively wide lens (I think around a 50mm on the 12:1). Take one, the director yells, "No, no, no!" He then yells that he sees a bump on the takeoff. Okay, I take a little steam off. Take two, the same thing. Over the course of the show, I begin to notice that I'm having to use the skates more often than ever, usually when we're on a long zoom. Complaints about the bumps become common from the operator and now I'm getting concerned. Finally, I've had enough and want to know what's going on. After looking at the camera, which I hadn't really bothered to do closely, I notice that it's supported solely by a tiny baseplate that's about 3" by 3". There's basically nothing supporting the huge lens or the back of the camera. It's all balanced on this tiny baseplate, an incredibly stupid design through which even the slightest of vibrations is transmitted. So, I've had to really go back to the basics on my track laying.  Now, I not only level with the whiskey stick (level), but sight down it afterwards and use shims to tune up the joints, even though it may not read exactly level afterwards, something I wouldn't necessarily have done if we had been shooting on a film camera. (As a matter of fact, I just finished a Panaflex show and rarely did this and never had a single complaint of a bump showing in the lens). I called some dolly grip buddies of mine who had done work with the Alexa and discovered that this was a common complaint, though maybe not as prevalent as on my show where we constantly use a long zoom and are also using the smaller diameter 15mm rods as opposed to the 19mm rods. We recently switched out to the 19mm and it seems to have helped, but it has been a pain up to now. My key grip finally told the DP that he can't redesign the camera in the field and the baseplate is an incredibly ridiculous design, so they tried the larger rods. Anyway, if you use the Alexa, be on the lookout for this. And lay it straight.
Posted by D at 6:49 PM

Have you had any luck convincing the camera dept to switch to a baseplate that supports both the front and the back? I haven't had this problem yet, but it's coming I'm sure.

I've worked with these cameras for a few years now and they certainly make many things more challenging. Every department has to step it up to keep up with the technology for sure. I haven't had this problem with the track bumps, (and I'm the first one to admit my track laying leaves something to be desired! Hahaha!!) but maybe the camera departments are using the proper mounts that hold the lenses in a stronger fashion and I'm just not paying attention to that part. It's worth looking into as most people don't know how tricky some long track runs can be and every little bit helps.

Now to defend my own dig at myself: I can lay track with the best of them, I just always like to make it more challenging and sometime that comes back to bite you in the ass like a rabid dog!!

Hey D,
The very new Alexas seem to have a new mount that is a lot more stable than the old one. it is a huge improvement.
just finished a 6 day shoot. it was way better on the dolly and steadicam.

You can request the "Steadicam plate" from most rental houses which bridges that gap across the shoulder cutout between the front and back of the camera, I do this on every Steadicam job I work on with the Alexa, or you can buy one from Pro GPI in america http://www.gpiprosys.com/NEW_GPI/accessories.html

This eliminates the issue by cancelling out all/most of the flex you would experience from mounting to the front area only.

Hi James. Our operator has a plate but they decided to try the larger diameter rods first which has made a huge difference. Our main problem was with using the 12 to 1 zoom and there's nothing attaching the rods to the plate so it's just floating and flexing but it seems to have been solved. Thanks for the advice.
D

We will introduce our own Steadicam plate at ibc 2012, called the Universal Adapter Plate UAP-1. This plate will work for Steadicam, make the camera more steady on a tripod and will also be used for the new ALEXA M "D-bracket". All that stuff will be on the ARRI website during ibc.

I'll be there and will take a look and hopefully get a few pics. also going to be at Cinec in Munich two weeks later. For those of you who are in Europe and can find the time, Cinec is a great place to see some new stuff.

I personally own one of these beauties for when on Steadicam, but I'd also encourage it for studio and dolly:

Also, I had an Alexa from a rental house that had a Panavision / ENG Sony quick release style plate at the bottom that locked into the rear knob as well as the front tie-down area.

I'd request those with any Alexa package, but seems like too many shows get an Alexa with the long Arri dovetail. Sure, gives you great balance options, but the head itself can handle balancing placement.