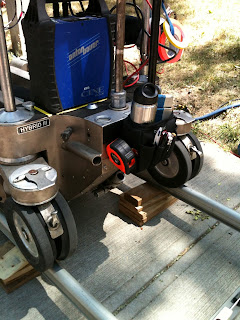 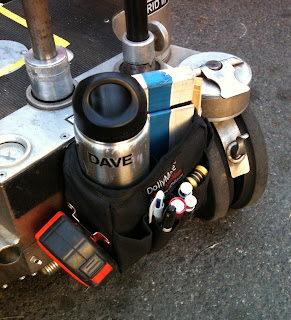 For years I had an old ammo box that I had ripped the top off, and then velcroed it to whatever dolly I was using. As much as I liked having the storage space for all the "little things" - grease pencils for the Fisher Ten arm, pens for my crossword and shopping lists, etc - it was a little big and got in the way. I eventually stopped using it.

Like any good technician, I've been trying to up my water intake and with productions springing for water bottle alternatives, my dollies end up covered in water bottles - more stuff to fall off when "coming off the rails", etc.

Along comes CGE Tools' DollyMate MiniMate. As soon as I saw this little bag, I had to have one. I've been impressed with it's manufacture. I thought that the magnets wouldn't hold up to the weight of my larger water bottle, but it's been hanging on for a couple months now, without a sign of giving up. I asked CGE Tools John about the number of magnets sewn in the MiniMate and my concern, and get got back to me quickly saying that due to the price of the magnets themselves, it would have meant adding to the price. Fair enough. Works great as advertised!! I work day in / day out on a Hybrid and being able to slap it on the side of the dolly if I'm backed into a corner its incredibly useful.

CGE makes three sizes. The largest - the Archetype, is an apron that sized is appropriately for the back of a Fisher Ten and can carry almost everything and the kitchen sink. The medium is the MiniMate and carries two bottles, tape measure and any other little bits. The smallest (and not really) is the SaddleBag, with one main compartment, tape measure clip and a bunch of little pouches.

Thankfully I've been able to talk my local expendables store into carrying CGE Tools products (check out the website: http://cgetools.com) and have since bought four more MiniMates as gifts.

Hey D,
Thats exactly the product I am looking for. Thanks for the review !

I would love to have one of those. Compared to the original price shipping to Germany is incredible expensive from the US though. Does anyone know if anyone carries them in Europe?

Yeah Markus,
I tried ordering it online, and the shipping to India was almost 300 $.
I doubt its available in Europe yet. If it is, I will buy it when I get to Berlin.

Maybe we get lucky and we find it at cinec:-)

Dave sent me one. It works great. I love not having to root around in that huge bag anymore.

I gotta say, having just finished a show with the MiniMate, it made my life so much easier and simplified everything. It's my favorite thing now.

Cinetools.es in Spain has them