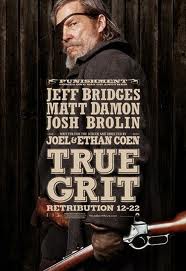 I'm a huge fan of The Duke. True Grit, along with The Searchers and Big Jake, is one of my favorites (the dolly-in on Ethan's reaction in The Searchers as he enters the asylum and sees the women who have been brutalized by the Comanche has always stuck in my mind). So it was with some trepidation that I went to see the remake by the Coen Brothers (remake isn't entirely accurate. The Coens went mostly with the Charles Portis novel which has a different ending and a different point of view altogether) I just couldn't see anyone taking the place of The Duke in the role of Rooster Cogburn, for which Wayne won his only Academy Award. I was wrong, on many counts. It's good. It's real good. I knew going in that technically, a movie made in the sixties would be inferior to a modern retelling, but in my opinion, everything worked much better. The story flowed much more naturally (as it should if it followed the novel) And of course Matt Damon as LeBoef was light years ahead of Glen Campbell's stilted performance in the original.The star of the show, however is young Hailee Steinfeld as Mattie Ross. No one really liked Kim Darby in the original, but Steinfeld's Mattie Ross runs away with the show hands down. If she doesn't get an Oscar for this one, no one should get one. But enough about the cast. There are more than enough reviews out there to cover that sufficiently. Roger Deakins and company have turned out one of the most beautifully photographed movies I've seen in years. On a crisp digital projection, it's jaw- dropping in places. Dolly Grips Bruce Hamme, and Rick Marroquin did truly beautiful work with sweeping crane shots and understated push-ins. Gentlemen, this is the one we all wanted to work on*. Dollygrippery  salutes you. Your contributions helped make True Grit a beautiful piece of work.

* A buddy of mine heard that I was working on a Coen Brothers picture at the time this was being shot. After bombarding me with baffling texts wondering if I could help him get a spot on  True Grit, I made it clear that I was actually working on a Farrelly Brothers picture, and while I love Bobby and Peter, I would have gladly left for a Dolly slot on Grit.
Posted by D at 8:18 PM

It's been a few weeks since I saw the new version, so I may be saying this badly, but what did you think of the whole sequence when Rooster is trying to get Mattie to a doctor? I understand that they were trying to show just how isolated the two of them were...how vast the space they had to traverse. But I thought the locked off camera with the weird starscape CGI'd into the background was pretty cheesy looking and it took me out of the moment.

Otherwise, though, I was pretty much blown away by everything about the film.

Nathan, actually, I almost mentioned that one spot of unreality in the picture. The thing is, given a delirious Mattie's point of view, it didn't really bother me that much. She even hallucinates at the point where it becomes really obvious. I noticed it, but didn't hate it. Thanks for the input.

Well color me stupid. I honestly didn't realize that was meant to be a POV.

It wasn't really a straight pov. I think it was a shot from behind them as they were riding,but I still took it as matties state of mind
or maybe I'm just too forgiving.