Moviebird Review and Something Cool

I had been hearing a lot lately about the Moviebird Technocrane and was curious to try it out myself. Last week I got the chance. We used the MB 35/45 over several nights and I must say that it performed admirably. We put it through several paces including a full speed extension matching a running actress and it held up well. We got the crane from Procam Rentals and Tech David Hammer came out with it and was a pleasure to work with. The crane will operate at 35' max, or, with the addition of an extension, at 45' max. Hammer explained that at full 45' extension it does get a little whippy but that this can be alleviated somewhat by dropping it back down to 35'. We used it at full extension and while there was a good bit of whip to it on a fast pan, it was possible to finesse a lot of it out after a couple of runs. I have to say that at the full 45', just shy of what a 50' Supertechno would offer, the arm is extremely responsive and not near as bulky or clunky as a 50' Supertechno. The arm balances extremely well and doesn't require a lot of babysitting. The tilt dampener on it also works well and holds it rock solid. Set up is pretty much just like the normal Technocranes we're all used to. Altogether, I would have to say it's a solid choice and wouldn't hesitate to use it again.
Moviebird, and Procam also offer lengths of 17',  24' and 30'.
All in all, the only con that I saw at all was the whippiness at full stick at 45', but this is almost balanced out by the easier maneuverability of the arm. Of course you would have to pick a crane based on your particular needs.
I liked it and I especially like the responsiveness of the arm at full stick compared to a 50' Techno.
Pickle wise, it seemed comparable to the Technos we all know and love.

You can reach Procam Rentals at 818-717-0354 and Hammer will give you all the details. Their website is procamrentals.com . Tell 'em Dollygrippery sent ya.

Now, for the "something cool."  Those of us who favor the Hustler 4 know what a pain it can be in outdoor rural settings. It's just a little low to the ground and heavy to get over roots and hills etc. While I was away on my movie, the boys on my series came up with a set of big wheels that mount into the sideboard receptacles. They screw in and though they aren't steerable, the Hustler pops up easy enough to allow a lifting bar inserted in the back to pop up the front and turn it. It makes a big difference. Thanks to Chapman for making them up. Here's a pic. 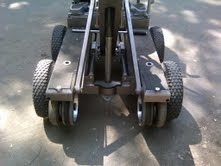 those wheels look great! i'm gonna try and have some made up tomorrow :)