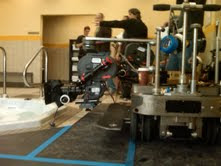 There's a scene in Die Hard where the FBI agent, played by Robert Davi, assesses the situation and says, "This is a standard A-7 scenario." or something to that affect. This line comes to my mind whenever a shot or setup that seems all too familiar comes up. Once you've done this long enough, it's hard to find a shot, or variation of a shot that you haven't done. There are also common dolly set-ups that you just have filed away in your head that you can pull up from the memory bank and slam together without too much forethought. The standard A-7 scenario. You know with a Lambda Head that you're going to need a camera offset (what we used to call a Ubangi until someone with way too much time on their hands decided to be offended by that term. I still call it that though.) You know you'll need a sideboard if it's a moving shot. And you know how to orient the offset in such a way that the camera operator can do the shot in a reasonably comfortable way. I generally always use a 12" riser with a Lambda also. It helps get the dolly arm away from the operator and I can still hit the floor with the head. After a while, you have dozens of these different set-ups floating around in your database. That's what helps separate a part-timer from a full timer. It takes years to build up a catalog of different scenarios to draw from. Over-Under Camera Rig? Bam! Got it. Twin Dollies Tied Together? Boom! Get me some pipe, sideboards for the Peewee and chain vice grips. Need to mount an actor on the dolly with the camera looking at him as he moves back? Front board and a camera offset (Ubangi). This database is what will save you valuable time and double work when someone else would be looking down and scratching their head.
On a different note, the show is going well. Again, the Camera Operator, Jaques, Matt, the DP, and Jeff, the
First AC are all top notch and a pleasure to work with. Internet service is spotty here, so I may be a little infrequent, but keep checking in.
Posted by D at 4:49 PM

Great post D.
Its something you see often with an inexperienced dolly grip. The operator is struggling to get into a comfy position. All the European operators who work with panthers or magnums will know what you mean. Those dollies are always in low mode, and are really tricky to get an operator into a good position. It is like tetris.

Hi D!
How have you been? I love this post! As I hone my craft it has become easier to foresee my dolly setup and pull the right accessories out ahead of time. The Ubangi comment really made me laugh! I have actually worked with a colleague here who refuses to let me use that term when we are on set together! He says it's an offensive racial term because it makes fun of the Ubangi tribe that puts plates in their lips. I do not find this term offensive and honestly in my opinion if you're going to be offended by that than you might as well protest them all!
Beaver board, Blonde, Redhead, Buttplug, BJ, Platypus ;) etc.....
=D

did you go in low mode then add the 12 inch riser?