New Pictures and a Story 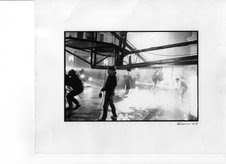 I've gotten a couple of pictures in, but not nearly as many as I'd hoped. I've added a few on the right (I know my pictures were getting old) courtesy of Sean Devine, Stephen Murphy, and Alexa Mignon Harris. The above is from Rick at http://grip411.com/. This is (strangely appropriately) from the Michael Jackson video Smooth Criminal in 1987. His came with a story that I'll let him tell in his own words:

"We were doing a shot starting high and moving down right into Joe Pesci's face. I had to cut once because there was a by-stander standing right next me as I was swinging the arm around. I told him to move so I don't hit him in the teeth with the arm... he apologized and moved over.In between takes he came back and bummed a ciggie.Next take there he is again right on my ass... "Dude! you gotta get the f--k outta way" I said."Oh sorry" he said as he was backing up. As he was walking away he trips on the headset wire and rips it off my belt... the stills guy got the shot just as I looked back at this jerk-off. The guy was Bruce Willis. He was just hanging around the set watching...not part of the shoot in anyway."
RD

I'm working on how to get the pictures bigger, haven't solved it yet, even though I clicked the largest size in the layout.
I did the final load-out at Chapman today and had a talk with Dana in the office about having my standard package as well as dolly numbers that I prefer on a list or database somewhere so that it's not a new experience every time and if my favorite dollies are available, they'll hopefully be pulled out for me. I worked so long on the East Coast and dealt with the same people over and over that after working in LA for 8 years, I still didn't have a relationship with anyone at Chapman LA other than the guys on the dock. She was very helpful and hopefully this will streamline my checking out process. It's something that I should have done long ago and just never did. (No, I won't tell you the numbers of my favorite Hustlers).
ps- I appreciate the pictures more than you know. Please be aware that by sending them, they will be posted at some point and I'm looking into starting a Flickr page so that they are all more easily accessible. They will always be attributed to whomever sends them. If you have a problem with any of this, please don't send them.

Darryl,
thanks for posting the picture - I wish it was bigger so you could see the look on my face..."dude what is your f'n problem?"
We had one of the Lenny Arms on the Titan platform - Mike Liakos is up on the platform - Peter Wagner is on the camera end

I know Rick. It's such a great shot and the look on your face is priceless. I'm working on figuring out how to resize it.