Dolly Grips and the Camera Dept. 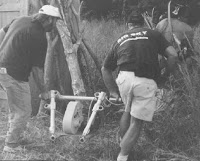 Those of you finding this by searching for "Dolly grip job description" should see my post http://www.dollygrippery.com/2010/01/dolly-grip-job-description.html.

I'm not really in the mood to write anything but I know I need to so here goes:
The story has been floating around the business for years that Dolly Grips may be/should be/will be absorbed into the camera dept. I've heard it from operators, ACs, Key Grips, and even a gaffer or two. First of all, let's get the obvious out of the way. It makes sense from a camera standpoint. We tend to work more closely with those guys than we often do with our own. We rig the cameras, carry the cameras, level the cameras, even carry a case or two if we really like them. Operators slap us on the shoulder and say things like,"You really made that shot," or "You are a camera operator too." (Too bad we don't get paid like one). They even have their loaders bring us coffee. Most of us even know where the camera is going before we place it. I turned it into a game a few years ago to see how close I could line up the camera to it's final frame before the DP looked through it. As the years went by, my average got better and better.
Having said all that, I think it's a bunch of hot air. We're too firmly entrenched in the Grip dept for it to ever work. With all the rigging we have to do, we'd have to come up through the Grip dept anyway. I guess that's the only way it ever could work. You slave in the trenches until you get enough credits/experience to make the jump and then plunk down your money for a camera guild card. Techno techs already do something like this anyway.
I don't know the specifics of why or how the Dolly Grip started in the Grip Dept but I have a theory. In the old days (30's and 40's) cameras and dollies were monstrous. Moving the camera involved not just brute strength, but a good bit of ingenuity, both traditionally the areas that Grips excelled in. They started there and, as equipment got lighter and more versatile, they stayed there. Now, there's a new crane to learn how to put together or operate or a new dolly to master every year it seems. More is expected of Dolly Grips than ever before from the camera dept. I think MTV started it.. Back in the day, camera moves seemed to be more effective and made a bigger impact because they were used more sparingly. It was a bigger deal to move the thing. You got a push in here or a lateral track there complemented by a big crane shot every now and then. Now, we're constantly swooshing and pushing in and turning the camera upside down and flying it over trees and any other place they can think of to stick it. And we deliver. Unfortunately, our pay (or status) hasn't gone up as much as the demand. So we're stuck in the neutral zone between two departments. Our heart belongs to one, while our brain belongs to another. Anyway, these are just idle musings on my part while I kill time to the next epic. When I'll start the swooshing and pushing and upside down over the trees crane swishing (I hope).
So what do you guys/girls think? Would it be a good idea?
Posted by D at 4:33 PM

If it worked as you postulate -- come up through the grip department, then make a lateral move into Local 600 as a camera operator -- this would seem a good thing for dolly grips. Your paycheck would roughly double, for starters.

It might seem a bit strange, being the bastard child of two departments: no longer really a grip, but not a fully-geeked camera nerd either. Still, getting paid twice as much just might take the sting out of that.

The one-line job description for a grip reads:
lighting diffusion and camera movement.
I don't recall where I saw that, but it pretty much states what a grip does. WHY is another story, huh. And we know that's there's a buncha other stuff involved, too (grin)
Meg

Thanks for the comments Michael. Very true.
Meg- You are of course correct. But gripping has always been a rather strange hodgepodge of duties (if you read the Local 80 manual, there's a section on ship's rigging-the kind in the masts not the kind we're used to)I'm neither for nor against the idea, I just wanted to address that it was out there.

I'm going to stste again- I'm neither for, nor against the idea. I enjoy gripping and being part of the grip dept. I was just curious about the sentiments out there.

Out of curiosity, what are the pay scales for a dolly grip or best boy grip or key grip, compared to say a focus puller/ 1st AC or loader or camera operator in America ? Is a Key Grip paid the same as a Gaffer?

Hi Gripworks,
Yes, Key Grip and Gaffer make the same. Best Boys and Dolly grips make roughly the same although sometimes the Dolly Grip may make a couple of dollars more, depending on the contract. A Dolly Grip makes roughly what a second AC makes, or just a few dollars less than a 1st AC. It also depends on what part of the country you are in.

I'm a dolly grip from Ukraine.
There are two main rentals that offer dollies here and one of them considers dolly grips as a camera department.
I can't say definitely why so because I work there only a couple of years. But it seems to me that the idea comes from the space in trucks which transfer equipment. Since there's pretty roomy in the "camera wagen" (we call it so) and a lighting truck has too many things to stick a couple of tracks more, dolly grips always come to the location together with a camera guys.
When I came to work here I felt it absolutely natural. Because, yes, we influence the shot.
I knew that in Germany and in the US you stick with lighting department. And another rental in Ukraine does so too. But I agree it's not a problem to be a part of the camera. Maybe, it should have been so from the beginning.
By the way, we have no duties to fix diffusion or do whatsoever with lighting. There's no time for it if you've got to lay track and push that damn heavy dolly. You kno what I mean. ;)

Nice post! This is a very nice blog that I will definitively come back to more times this year! Thanks for informative post. best camera dollys