Q and A With Sean Devine

I've known Sean for around 15 years. He is a veteran Dolly Grip who came up old school. His credits include: 42, Drive, and The 40 Year Old Virgin. I happened to be texting back and forth with him last week and decided it would be a good idea to ask him some questions about the craft in general and his latest project, A Quiet Place II. 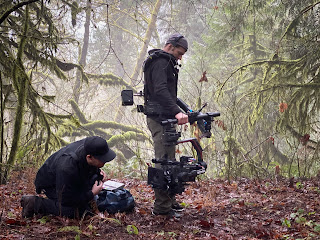 Tell me what challenges you faced on Quiet Place? AQP2 was challenging for everyone. The entire movie was on the move. Running, long oners, lots of locations. We have gotten so used to moving small digital cameras with primes that going back to film made it exponentially harder. I found myself on an electric car with a Miniscope and a Libra chasing or leading people in closeups very often. Shots evolve for John. What starts out as one thing almost always morphed into something very different. The challenge of that was giving ourselves enough room to evolve. The last thing we wanted to do was to be backed into a corner with nowhere to go. I also saw more Don Juan steadicam on that movie than I have in the last 10 years combined. Running full out, balancing the camera, and framing the camera backwards is one of the most difficult things I can think of for an operator to do. Matt did it on a regular basis when no other tool would do. We tried a rickshaw which was not maneuverable enough. Matt threw out the idea of the Mini Libra on the steadicam arm, but we never got that one going because of weight limits for the head and the film camera. Recently we were able to mount a Ronin 2 on a Steadicam arm with a Sony Venice. It worked great. Being able to concentrate on running while someone else operates makes all the difference. (see attached). All in all, it was an extremely fulfilling experience. Honestly, between the 3 jobs of operating, pulling focus, and pushing dolly, I had the easiest job. Speaking of pulling focus. Steve Cueva was often wide open, shooting anamorphic, on a long lens, and winging it. He is my personal hero.


I know you've worked a lot with Matt Moriarty. Tell me about the dolly grip/ operator relationship:  Matt and I met on Castaway in 1999. We became close friends a few years later when I pushed dolly for him on his first ‘A” camera job with John Bailey. Matt and I share similar work ethics and get along very well. I love that Matt is very direct and keeps order around camera. I learned under Tony Rivetti and Moose Howery. I was taught that a dolly grip stays with camera and supports camera however he or she can. It has been invaluable. For instance, very difficult Steadicam work was often used on AQP2. My job was to be there and pick up the slack and support Matt, Steve, and Kate Luele (2nd AC). In return, good rapport and friendships are built. Matt asks me what I think and in return I acknowledge the responsibility that he has to get the shot. To me, that is exactly the relationship to have between an operator and a dolly grip. Matt and I have it down.


What shortcuts might you give a young dolly grip? Stay with camera, don’t wander off. Support the camera crew and help them. Pay attention to blocking. Eavesdrop on conversations about the shot. The more that you know and understand, the easier it is to get the camera where it needs to be at the right time. Pay attention for your key grip. You are right there watching everything, help the key catch things. Keep a good positive attitude. I am by no means a model for that, but I do notice how vastly different life is at camera is when I’m present and friendly.


What has changed about the job in the last 20 years? The job went from being an extension of the grip department, where the key decided very often how shots would gt made, to several years of handheld camera (yawns), now back to getting extremely challenging shots. I find myself in the position of solving difficult logistics quite often these days. To the point where I question why I’m the lowest paid person directly involved with getting shots. Often as a dolly grip I find myself solving problems for an operator.


What things do you look for in a setup that might make your operator's life easier? What problems do you solve? I worked on a show for a while last spring that had me at camera by myself quite often because the DP also operated. The shots were long and complex. It was a bit shocking to the system at first but then I got into it. I could see all of the blocking problems, bogies, and actor issues when nobody else could. I like an operator that takes charge of the set and improves on the ideas presented so that’s what I did. And it was met with open arms. My point is, the more experience you have as a DG, the more easily problems become apparent. I watch for these things because no one person can catch everything. Help police the frame. Make suggestions on blocking if you and your operator have that relationship. Keep your operator informed so that good decisions come easy.


Thanks to Sean for the great advice. I'm going to try to do more interview type posts with some of the great Dolly Grips we have in this business. Stay tuned.
D

This was a great interview!

Packers And Movers Jaipur said...
This comment has been removed by a blog administrator.
11:00 PM

Packers and Movers Hyderabad said...
This comment has been removed by a blog administrator.
4:27 AM