This post is different. It won't be about dollies, or track, or cranes. It's about something far more important. 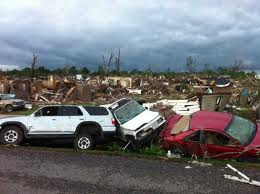 "In the place where I was raised,
clocks tick and the cattle graze.
Time passed with Amazing Grace,
Back where I come from."
-Mac Mcannally


A couple of days ago, I awoke as I normally do, tired and cranky. I had a three o' clock call time so I had a few hours to relax and also watch my baby boy while my wife went to the gym. I sat down on the couch and turned on the tv and saw something extraordinary. I saw Concord, Alabama on my local Los Angeles Fox affiliate. What makes this extraordinary is that the only reason that Concord, a small rural hamlet outside Birmingham, would be on television in Los Angeles is that something really, really bad had happened. It had. I knew that there had been a storm and that tornadoes were in the area. I had, in fact, watched their progress on my Droid a little anxiously the day before as they bore down on my little hometown. I mentally went down the list of where my family members were at the time- daughter in Atlanta- good, Mom and Dad at home*- bad, sister and kids and various aunts, uncles, cousins and friends at home*- bad. I quickly made a few phone calls and put out a request on Facebook. Once I was assured that everyone was ok, I had to go back to work and didn't really have a chance to check back in for a long while. Now, I was looking at my television in sunny Los Angeles and seeing miles and miles of splintered trees, empty concrete slabs, and debris. It was unfortunately a familiar sight.
In 1998, an F5 tornado roared in from the west and detonated on the Oak Grove-Concord area like a nuclear device. It left a swath of destruction a half-mile wide and took with it 32 souls. It left the wreckage of countless houses, trees, cars and my high school scattered for miles. I found out about that storm much the same way as I did this one. On my couch in Atlanta, watching CNN. My daughter was about two at the time and after kissing her and her Mother goodbye, I raced the three hours from Atlanta to Oak Grove to see what I could do. It was a sight I will never forget. I parked in a long line of cars just on a curve outside town and joined a crowd of other natives/onlookers walking slowly around the curve. As the town came into view, my jaw dropped. Helicopters hovered, firemen and policemen ran around shouting. Residents, people I'd known since I was born, picked through what was left of their lives. And as far as the eye could see was total devastation. 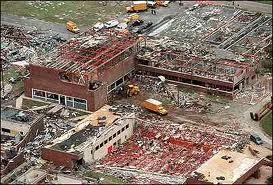 Let me tell you a little about this area and her people. Oak Grove, Alabama lies in a cluster of unincorporated, and incorporated towns stretching in a line from the Black Warrior River to Birmingham, around 30 miles. They have names like Rock Creek, Concord (pronounced "COHN-coard," not "Concurd"), Pleasant Grove, and Hueytown. It's a mostly rural area with three high schools, Oak Grove (my school),  and about fifteen miles away, Hueytown, and Pleasant Grove in close proximity to each other. Students from the three relatively small schools mingled pretty freely. We all went to the same parties, hung out in the same McDonalds parking lots on Friday nights, and worked at the same grocery stores on the weekend. It is a place of green rolling hills, Sunday School, pine trees, and and a big wide river made for fishing and skiiing. In the Summer, the air grows thick and lazy. Summer nights are filled with lightning bugs and the sound of crickets. Fall means crisp air, Friday night football games, and blazingly colored leaves. Winter sometimes brings a little snow. And Spring, with the May flowers, also brings tornadoes. Tornadoes are a fact of life in the South. They're just something you live with and don't really think much about because they rarely affect you directly. As children, we were all subjected to monthly tornado drills in elementary school. We dutifully knelt under our desks, covered our heads and privately wondered how effective a twenty pound desk would be when the roof got ripped off. Other than that, we really didn't think much about them. It was a great place to grow up. I actually still know the names of most of the people I started kindergarten and first grade with. I know them because I graduated high school (a high school that was now a pile of bricks) with most of them in a class of about seventy, twelve years later. We would spend summers as kids exploring the woods and having stick battles, and as teenagers, building a bonfire  out on a rutted track known as Joe Berry Road, turning up the radio and having a party. We weren't rich, but we sure were privileged. Now, a town I knew like the back of my hand was gone.
That was 1998, and now it's happened again. Not directly to Oak Grove. This time, at least, it was spared. Concord and Pleasant Grove, though weren't. It doesn't matter. For all intents and purposes, it's the same people being hit again just thirteen years after rebuilding. Only this time it was worse. An F5 descended from the west once again and cut a raw wound in this community. This time, along with Tuscaloosa, Pratt City, and a few more communities, the death toll is 250. Imagine ten or twelve random people who you saw at the gas station, sat next to in church, bought hardware from, people you'd known as long as you can remember, suddenly gone. And left in their place a pile of splintered wood and a homeless family trying to deal with the loss, not only of a loved one, but also their home.
I don't want to get too maudlin on this subject, but this place and these people are my own. Although I haven't lived in that area for years, it's still "home" to me. My family still lives there. Everyone I knew from birth to the age of twenty lives there. They're good people. The finest I've ever known. They are tough and proud. They are bent, but not broken. So, here it is.... I don't like asking for things. The information we provide here has always been free and always will be. But, if you are doing well, if you have ten extra dollars in your pocket, please give to the organizations listed at the end of this post. If you're down on your luck, send along a prayer. They surely need it.

*All my immediate family on both sides live in the affected area.

Visit  Hands On Birmingham to make a donation or, if you're in the area, to sign up as a volunteer.

You can go to bamastuff.com and order a "Roll Tuscaloosa Roll" tshirt for 10.00. All proceeds go to relief efforts.

alredcross.org  for the Mid Alabama Red Cross to donate. Click on "donate" far right top. The Birmingham or Tuscaloosa areas were hit as well as the Phil Campbell area in Franklin County.

Many of us in LA are from somewhere else, and that somewhere will always be "home." I experienced a similar shock while tuning in to watch the 1989 World Series being broadcast from San Francisco on TV, and saw/heard the news about the earthquake. That's a terribly helpless feeling -- so far away and unable to help.

I'm pulling for your family and friends down there -- and the next click of this mouse will be to donate to the Red Cross.

Thank you so much, Michael. I, and they, appreciate it.Everywhere you live it's something. Earthquakes in California, Hurricanes in Louisiana, typhoons in Asia...

Hey D,
Just saw the news reports and pictures, and I hope your family and friends are safe !
It looks crazy, the scale of destruction is scary.
Stay strong my friend.
I'll phone you later today, I am up here in Rhode Island,I just flew in day before yeaterday, and started shooting yeaterday. (so much for rest and recovery)