Something that happened earlier this week put me in mind of a post. I'm sure most of you who still pay attention have noticed that posts are few and far between these days.  Honestly,  it's hard to come up with anything new after almost fifteen years of  Dollygrippery. Every now and then, though, something happens that gives me an idea.

A lot of the movie I'm doing now takes place on an enormous interior mansion set. The rooms are huge, the hallways are huge, and as a result, we do a lot of the shooting on this set with a 23' Scorpio Crane. It's a no brainer really. I can put the camera anywhere, and I don't have to lay a lot of track etc. This all worked out fine until one day last week when we devised a big master with several actors on the Techno, and the Techno wouldn't boot up. Time for Plan B. We threw the Matrix head on the dolly and basically did a huge dance floor shot. This of course entailed going somewhat old school and getting floor marks as well as several boom marks.  It occurred to me as we were setting it up that twenty or so years ago I would have been sweating bullets as more and more camera positions were added. I think I ended up with six floor marks and three boom marks, As it was, it was no sweat and I have one thing to thank for it: television. Around fifteen years ago I did three seasons on a very popular HBO series. And it was brutal. I had already been a dolly grip for ten years or so and had some fairly big features under my belt so I was decent. This show however showed me how unprepared I was. Every shot was a dance floor. We even did them outside. And I never rested. I would basically lay half the room, shoot it out and lay the other half for the reverse. It was the most intense training I could ask for. I was exhausted,  I got to the point that I could generally get 90% in the first take and nail it by the second. I didn't have a choice, We moved fast and things had to be figured out and corrected on the fly. This brings me to my point. For a Dolly Grip there is no better training than a dolly intensive tv series. You have to move fast, be accurate, and get it with minimal rehearsal. You learn to break the dance floor moves into chunks, because trying to think of it all in one will scare the hell out of you. The next thing that was hammered home was to let the actors tell you where the moves are. I don't mean to ask them, I mean that if you understand the blocking, their movements will remind you where you next mark is. Some of the best dolly grips in the world work in television and I was reminded of that last week. So if you are a young up and comer, don't be so fired up to get to feature world. Take a few years in television to learn your craft, After that, everything is easy.

I'm gonna set the stage now. I'm doing a technocrane shot. We're on a Scorpio 45' with a Matrix head. The shot is, an actor runs out of a gymnasium into a lobby. He slides to the ground as we push in on a ground scraper to meet him. He jumps up and we rise with him. He runs right, around a corner. I match him on the crane. Round the corner, push at full speed over his left shoulder and WHAM! You know those clocks they have in some high schools? The ones that stick out 90 degrees from the wall? I obliterated one of those with a $100,000.00 head, The arm rang like a bell and my immediate reaction over the headset was, "Ohh s&%t!" The funny thing is, I had joked with the special effects coordinator before we even did the shot that I would knock it right off the wall. Anyway, this put me in mind of a post...

If you do this job long enough, you're going to hit something. In 30 years in this business, I have never hit a person but I have had about four major hits on a technocrane. They are as follows:

3. Football movie. The shot is a quick screamer on a 50' Supertechno from full height to ground level. I bounced the head off the turf like a rubber ball.

1, On very successful car franchise, I slammed a head into a helicopter on a gimble. This one bears some explaining. I was swooping around a gimbled copter on a 50' Technocrane. The DP asked if I could take the camera lower. I'm already stretched out as high as I can go on the bucket. I then had a foolish thought. I thought that if I could let go of the back of the arm for a second and grab it closer to the column that I could get the camera lower, and thus become a hero in my DP's eyes. Big mistake. I lose the arm completely, and it now starts slowly swaying toward the bucking helicopter (because it absolutely wouldn't go the other way) and I start yelling to Mike, the pickle op that  I've lost control of the arm as I watch it bounce off the helicopter.

The  point of all this is, if you do this long enough, you will make mistakes. Our job is such that we are entrusted with hundreds of thousands of dollars worth of equipment and then asked to narrowly miss destroying it. Sometimes you just lose. Let it go. Don't dwell on it. This is the hardest thing for me. I hate, HATE making mistakes. I hate blowing takes and I always feel like I'm letting my DP down. Let that go. When I hit that clock my DP laughed and said, "You almost made it!" He loved that I was trying to give him what he wanted. The truth is, sometimes we just lose. That's the truth. Every NFL quarterback throws an interception and he just has to let it go for the next play.

Hi everyone (if anyone is still out there). It's been a while. I'm currently trying to turn around from days to nights so I'm forcing it by staying up as long as I can. I usually accomplish this with copious amounts of vodka and Copenhagen, but since I have a doctor's appointment for a physical in the morning, I'll try to push on through with coffee. The writing will probably suffer.

Everything is cool here. Work has started back on a regular basis now. I actually get a couple of calls a week looking for Dolly Grips and I just tell them, "Good luck."  Other than that, not much to report. I'll try and get back to more technical stuff in the future so if anyone has any ideas for things they would like to see covered, please drop an email or leave something in the comments. I plan to revisit operator/ dolly grip relationships in the future as a kind of supplement to the Dolly Grip Q and A's that Sean Devine and I did over the summer. We had a great turnout and some very interesting guests. If you want to hear some Dolly Grips and Operators at the top of their game, see some video with commentary on how they accomplished some cool shots, and hear my dumbass drone on for an hour, click the link. I also listened to a podcast on the way home from work called Protecting the Frame. I listened to the episode featuring my friend Casey Hotchkiss, one of the funniest people on earth. They have several interviews with great Operators including Chris Mcguire, whom I'm working with now. It will give some great insights as to how Dolly Grips can be more effective in working with your Camera Operators and Focus Pullers.

In the meantime, I'll try to get my thoughts together on some new material. Actually, maybe something about Focus Pullers would be the way to go. As a start, there is an article in this edition of  ICG Magazine featuring interviews with Dolly Grips and 1st AC's about their working relationships. Give it a look!

Till next time (I'll try not to take as long),

I hope you are all doing well. It's been awhile, I haven't posted because, as for you, my days were almost all identical for a while, The only real distraction I had was when Sean Devine and I put together the  Dolly Grip Q and A's. They went very well and we had a great response. I hope to resume them at some point.

Meanwhile, work seems to have returned. I went back and finished the show that shut down and am now on an action movie that shoots for just another month until my next long term job. I didn't want to do it but I have to say it's the best work I've ever done. I'm doing shots with a Peewee and a stabilized head that would have normally been Steadicam shots. Four minute takes racing down corridors and through doors ending up between bars in a jail cell type stuff. It's a challenge and I'm having a great time. As I told a friend of mine a few weeks ago, it's a great show to sand off the edges with. Anyway, I'll hopefully have more to say in the future now that we are getting back to work.

I'm Still Here. Check It Out!

Next Q and A: Manufacturer's Roundtable With Cinemoves, Chapman, Fisher, and GFM


Sorry all, I've been a little slack lately so I'm just getting this up. Friday the 26th at 1pm PST. Be there! Link is below:

Next Q and A: Brad Rea and Peter Rosenfeld 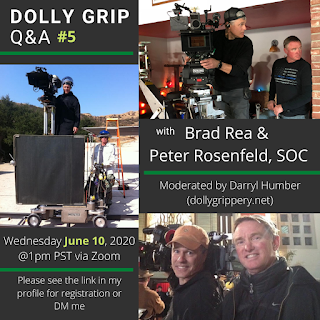 https://us02web.zoom.us/meeting/register/tZIkcu6tpj4uEtAYk0Xjmmj8iQS2QTvFj_oV
Posted by D at 7:01 AM 8 comments: